Government needs to reflect and communicate clearly that there is a plan: Ray Williams

It’s a budget sure to open up a $101-billion debate over what Canada needs to navigate the turmoil of the pandemic - and whether the country is spending too much to get us safely to the other side.

The federal Liberals have tabled their first full fiscal plan of the COVID-19 era, earmarking billions for everything from childcare to business supports to worker benefits.

And with the price tag for those additional supports coming in at $101.4 billion over three years, the government is already playing offense.

“Some will say our sense of urgency is misplaced; some will say that we are spending too much,” Finance Minister and Deputy Prime Minister Chrystia Freeland said in prepared remarks for her budget speech to the House of Commons.

“To them, I ask this: Did you lose your job during a COVID lockdown?”

BNN BLOOMBERG POLL: How do you feel about Canada’s economic outlook after the budget? 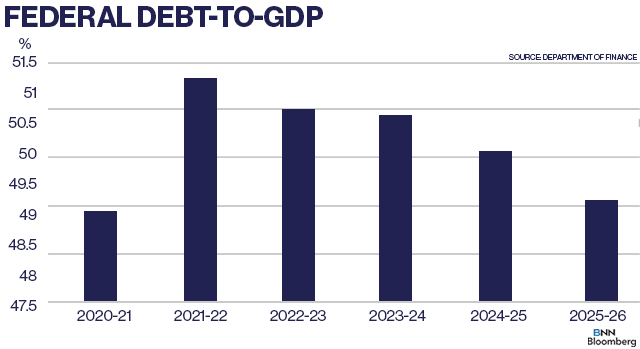 On the question of whether Canada can afford the budget, Freeland points to low interest rates.

“Not only can we afford these investments, it would be short-sighted of us not to make them.”

That said, it will be a topic most definitely open to debate.

With the labour market and broader economy showing surprising resilience through the winter months, economists and business leaders have recently questioned the need to aggressively ramp up spending. 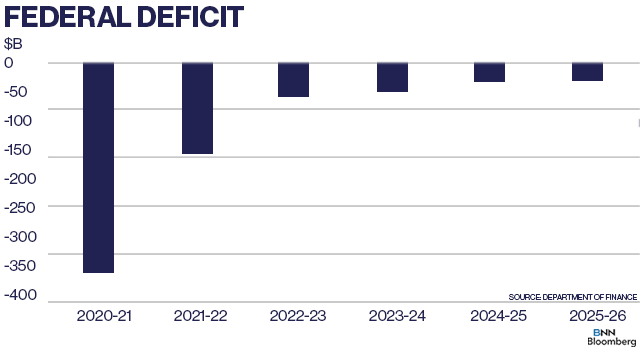 Ahead of the budget, TD Deputy Chief Economist Derek Burleton told BNN Bloomberg that any significant spending, “should be dedicated to areas that would likely provide significant long-term growth benefits.”

Enter the childcare commitment of up to $30 billion over five years, reaching $8.3 billion every year on a permanent basis. The goal is to provide families early learning and childcare for an average of $10 a day, five years from now.

While the labour market has made impressive gains, it has been clear women are disproportionately affected by the repeated business closures in the services sector – not to mention schools shifting to online learning.

And with affordable childcare seen as a lynchpin to ensuring women can fully participate in the workforce, that $30 billion of spending is likely to garner praise in many quarters.

With the third wave of COVID-19 once again hitting the economy, business relief programs such as the wage subsidy, rent subsidy and lockdown supports are being extended. Small business owners have told BNN Bloomberg extending those programs will be critical to their survival – and the estimated additional cost there is some $12 billion this year alone.

Workers will see the Canada Recovery Benefit program extended to a maximum of 50 weeks, and almost $4 billion will be spent over 3 years to make employment insurance more accessible. 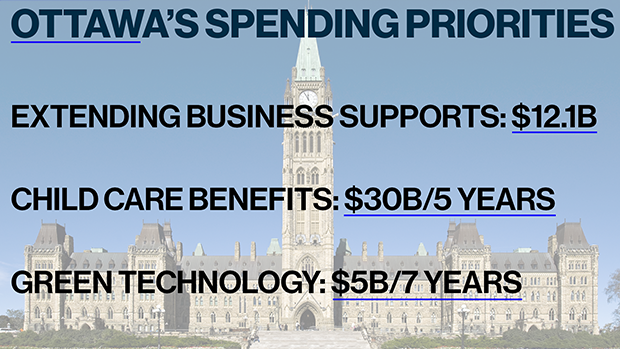 In short, it all starts to add up.

In her speech to the House, Freeland said the government understands “there are limits to our capacity to borrow.”

“These are important markers,” said Freeland.

With the Trudeau Liberals in a minority government situation, the spending plan could become an election platform – in which case Canadians can decide if $101.4 billion in new spending over three years is in the best interests of the country.