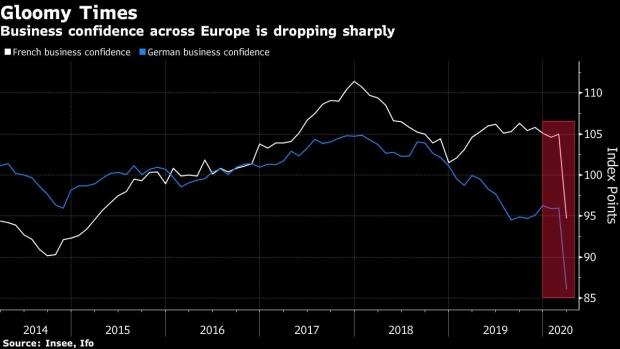 French business confidence plunged at a record pace in March thanks to shutdowns related to the coronavirus.

The drop echoes that seen in Germany in figures earlier this week, where the Ifo Institute said sentiment also dropped at the fastest pace since reunification.

The French index fell to 95 from 105 in March, statistics office Insee said Thursday. The 10-point drop is the largest in the series and was bigger than economists had anticipated.

French President Emmanuel Macron has put the country in lockdown in an effort to contain the spread of the virus. To cushion the economic impact, the government has announced 45 billion euros of spending to avoid job losses and bankruptcies.