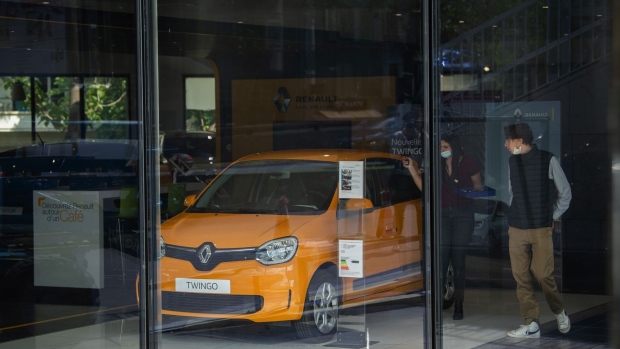 A sales person, left, gestures beside a Renault Twingo E-Tech electric automobile inside a Renault SA showroom in Paris, France, on Wednesday, June 9, 2021. The manufacturer announced on Wednesday the creation of ElectriCity, a wholly owned unit that combines operations at three sites in Douai, Maubeuge and Ruitz and will aim to produce as many as 400,000 vehicles annually. , Bloomberg

French car sales slumped 35% in July as a semiconductor shortage curbed inventory in one of Europe’s biggest markets.

For the first seven months of the year, registrations rose 16% over the same period in 2020, when sales were depressed during the first wave of the pandemic.

The sluggish result is a further indication that Europe’s auto-industry recovery is slower than the rebound seen in the U.S. and China. The latest data from the European Automobile Manufacturers’ Association showed almost 2 million fewer cars were sold in the region during the first half compared with two years ago.

Renault SA on Friday forecast disruptions in the supply of chips would curtail output this year by about 200,000 vehicles, double a previous estimate. It sold 1.42 million vehicles worldwide in the first half, down almost a quarter from the same period in 2019.

The caps on output have frustrated manufacturers like Volvo and Stellantis NV, the maker of Peugeot and Citroen brands that goes head-to-head in the French market against Renault.

“We are very sad to see we have a stellar order book and are struggling to deliver,” Stellantis CEO Carlos Tavares told the Detroit-based Automotive Press Association in July.