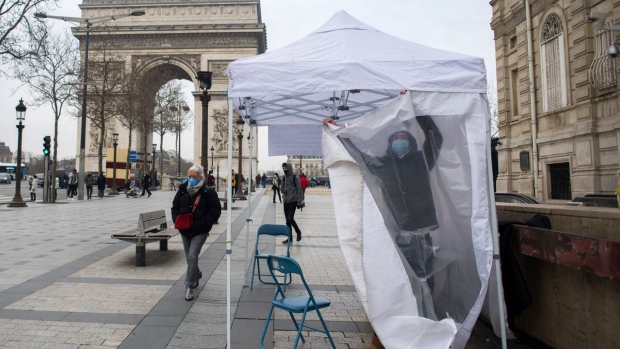 A pop-up Covid-19 testing tent being set up near the Arc de Triomphe in Paris, France, on Wednesday, Jan. 12, 2022. The pandemic in France has become a live political issue as authorities are struggling to contain the spread of the omicron variant and new infections hit a record. , Bloomberg

(Bloomberg) -- France reported more than 400,000 Covid-19 cases for the fourth day in a row, less than two weeks before pandemic restrictions are scheduled to ease.

French leaders are betting that infections will recede, in part due to restricting most social activities -- from eating in a restaurant to taking a train -- to fully vaccinated people. The measure, scheduled to take effect Monday, won backing from France’s constitutional court on Friday.

France recorded 400,851 new cases on Friday, according to the public health office, compared with a record of almost 465,000 on Tuesday.

Prime Minister Jean Castex said Thursday that several measures, including a mandate to work from home at least three days a week, would end on Feb. 2.