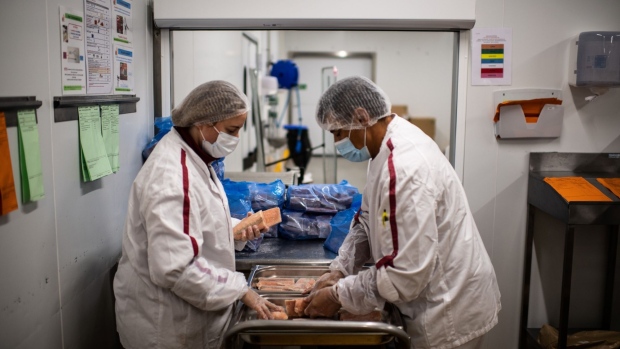 (Bloomberg) -- Elior SA is discussing a potential tie-up with biggest shareholder Derichebourg SA as the French caterer looks to shore up its balance sheet amid the ongoing high-inflation environment.

The proposed combination would see Derichebourg transfer its Multiservices division to Elior, both companies said in statements Thursday, confirming an earlier Bloomberg report.

Dericheboug may be able to increase its roughly 24% Elior stake in exchange, according to people familiar with the matter, who asked not to be identified as the plans aren’t public. Other options under review by Elior include a capital increase or sale of units in countries such as Italy and the UK, the people said.

No final decision has been reached and plans could yet change, both companies said.

Elior shares soared as much as 13% in Paris, the most in almost four months, and the company has a market value of €500 million ($521 million). Derichebourg slipped as much as 1.8% and was 0.4% lower before being suspended ahead of the statement.

Elior is in the final stages of reviewing strategic options and will announce the results “in coming weeks,” Chief Executive Officer Bernard Gault told reporters on Wednesday. He declined to elaborate on the options under consideration beyond saying the outcome will help Elior improve its financial situation.

Derichebourg, which built its stake earlier this year, has no plans to make an offer for all of Elior if the tie-up plan proceeds, the company said. In its own statement, Elior said the proposal is one of the options it’s considering as part of its strategic review.

Elior obtained debt covenant holiday extensions to survive the coronavirus pandemic, when restrictions wiped out demand for catered gatherings and shuttered schools and offices. Subsequent spiraling food prices and labor costs, as well as shortages of certain staples such as chicken, have also weighed.

The company had net debt of €1.22 billion at end September, compared with €1.1 billion a year earlier. It announced a refinancing last year and the next covenant-waiver test is scheduled for March.

At a conference in September, Elior hinted at “potential tighter ties” with Derichebourg, Bernstein analyst Richard Clarke wrote on Wednesday. Such a deal “becomes the key catalyst for 2023.”

Elior has almost 100,000 employees and a presence in France, Spain, Italy, the UK and the US, according to its website.

Elior and Derichebourg are down 57% and 52% respectively this year, making them some of France’s worst-performing stocks in the period.

(Updates with confirmation of talks in second paragraph.)