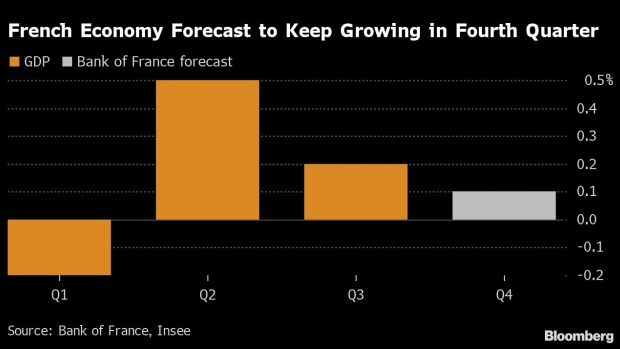 (Bloomberg) -- The French economy looks set to make it through the end of the year without a decline in output, even as business leaders are concerned about the increasing impact of surging energy prices on their activity.

A monthly survey of 8,500 companies by the Bank of France indicated a 0.1% expansion in the fourth quarter after activity improved more than anticipated in all sectors in November. Services are expected to grow again this month, while industry stabilizes and construction declines.

“If I had to sum up the situation, I’d say it’s sustained resilience, but higher uncertainty and heightened vigilance,” Bank of France Governor Francois Villeroy de Galhau said in an interview on France Info radio on Friday.

The central bank’s longer-term projections published in September assumed no growth in the final three months of 2022.

The latest assessment is relatively upbeat compared with an average forecast from analysts for France to finish the year with a 0.2% quarterly contraction. S&P Global’s purchasing managers’ index for November indicates a recession is already underway in the 19-nation euro area.

The Bank of France’s survey also showed supply difficulties eased last month, reaching the lowest level in industry and construction since it started gauging frictions in May 2021.

Still, the central bank’s measure of the impact of surging energy prices points to greater headwinds early next year. Of the business leaders surveyed, 24% said the energy crisis is already having a significant impact on activity, while 35% see a hit in the next three months.

After a 2.6% expansion of the French economy expected this year, Villeroy said growth in 2023 will probably be only slightly positive.

“I can’t rule out a recession but it’s not our central scenario,” he said. “If there were to be a recession, it would be temporary and limited.”

The governor expects a more normal situation to return in 2024 with “less inflation and more growth.”