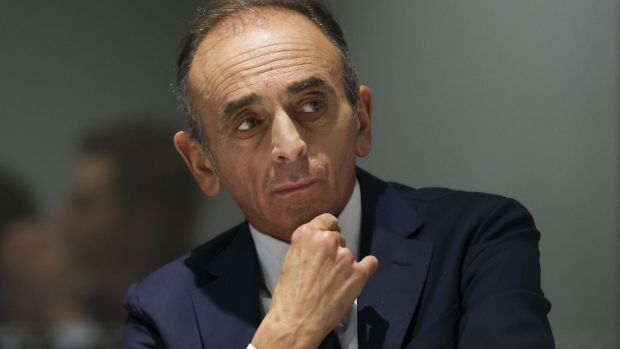 Eric Zemmour, political journalist, during an interview in London, U.K., on Friday, Nov. 19, 2021. Far-right French firebrand Zemmour ticked every box of the typical presidential campaign on a visit to London, but still refused to say he’s running against Emmanuel Macron in April. , Bloomberg

(Bloomberg) -- French far-right firebrand Eric Zemmour is sliding in opinion polls as a series of controversies may be hurting his chance of becoming president before he even declares his candidacy.

On a visit to the southern city of Marseille on Saturday, a woman gave the ultra-right media pundit the finger. From inside his car, he gave the finger back and shouted: “Very deeply.”

Last week, after a French magazine claimed that the 63-year-old had gotten a much younger aide pregnant, his lawyer, Olivier Pardo, lashed out on Twitter saying the article was contrary to journalism ethics and an invasion of Zemmour’s private life.

“A presidential campaign doesn’t allow for the use of abject methods,” Pardo added.

Posters of Zemmour began cropping up all over Paris in June, and in the following three months he shot up in some polls to about 17%-18% of voting intentions from virtually nothing. But that momentum has since stalled.

A poll released on Sunday by Ifop-Fiducial for Le Journal du Dimanche newspaper and Sud Radio had Zemmour winning 14%-15% of the first-round vote.

Bookmakers favor incumbent Emmanuel Macron to win the election with a likelihood of 68.4%, up from 68% a week earlier, according to data compiled by analysis platform Wettbasis on Nov. 29. Zemmour’s chance of winning dropped by 1.3 percentage points to 14.2%, the biggest decline among presidential hopefuls.