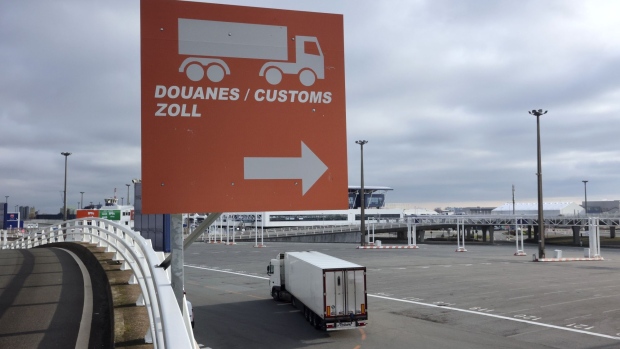 A U.K. bound haulage truck drives towards the customs area at the Port of Calais in Calais, France, on Friday, Jan. 1, 2021. The U.K. completed its divorce from the European Union, leaving the bloc’s single market and customs regime more than four years after the country voted for Brexit. Photographer: Olivier Matthys/Bloomberg , Bloomberg

(Bloomberg) -- France’s leading fishermen union said it will block access to and from three ports as well as the Eurotunnel on Friday to step up pressure on the U.K. over post-Brexit fishing licenses.

The protest will start with a one-hour blockade of the Saint-Malo port in the morning, followed by similar actions at 12 p.m. in Calais and early afternoon in Ouistreham, a spokesperson for the National Fish Committee told reporters in a video conference call.

Access to the Eurotunnel will be blocked from 2 p.m. to 4 p.m.

The move is likely to hinder the broad circulation of people and goods, but the union said the aim is only to disrupt the transit of U.K. ferries and transportation ships in French waters.

Gerard Romiti, the group’s head, said tougher retaliatory measures will be carried out if U.K. doesn’t stick to its Brexit committments.

The row over fishing licenses is one of the thorniest issues in the two countries’ post-Brexit relationship, which has been strained over issues from defense to migrant crossings and trade rules in Northern Ireland.

The French government has threatened to impose retaliatory trade action on the U.K. and Jersey, in protest over a lack of licenses issued to its boats to fish in British waters since Brexit.

Action could include tighter customs checks, a ban on British vessels landing their catches in French ports, and increasing energy costs for the British Channel Islands, which are heavily reliant on electricity from France via an undersea cable.

The U.K. and Jersey have been asking for evidence of historic activity that proves they are entitled to a license, something some smaller French boats haven’t managed to do.

“We hope that we will be heard,” Romiti said. “All we want is to recover our licenses.”

The U.K. government said it is “disappointed by threats of protest activity” and urged French authorities to ensure there are no illegal actions and trade is not affected.

“We have licensed nearly 1,700 EU vessels overall; our approach to licensing has been reasonable and fully in line with our commitments in the Trade and Cooperation Agreement,” a spokesperson said.