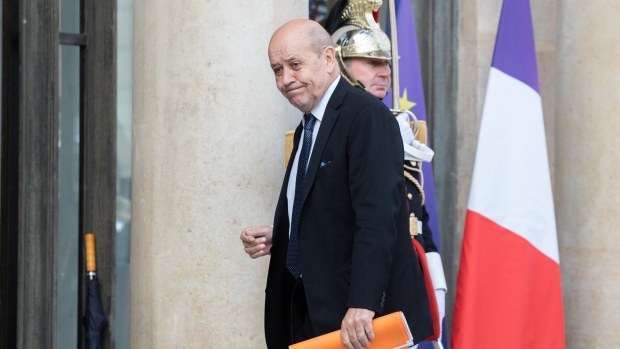 Jean-Yves Le Drian, France's foreign minister, arrives in the courtyard of Elysee Palace ahead of a meeting in Paris, France, on Tuesday, March 26, 2019. Airbus SE secured a $35 billion jet deal from China during a state visit by President Xi Jinping to the French capital, dealing a blow to Boeing Co. as it grapples with the grounding of its best-selling jet. , Bloomberg

(Bloomberg) -- France’s top diplomat unleashed a stream of invective against President Joe Biden after the U.S. and the U.K. announced a new security alliance for the Pacific region which will cost the French defense industry some A$90 billion (56 billion euros).

Foreign Minister Jean-Yves Le Drian told France Info Thursday that he felt “stabbed in the back” over the “unacceptable” deal that will hurt French business and shuts the French military out of a key initiative in Western efforts to build a bulwark against China.

“This unilateral, brutal, unforeseeable decision really looks like what Mr. Trump was doing,” Le Drian said. “This move is unacceptable between allies who want to develop a structured Indo-Pacific partnership.”

French officials were blindsided on Wednesday night when the U.S. and the U.K. announced a new security partnership to supply Australia with nuclear-powered submarines, beefing up their ability to deploy in China’s backyard. That agreement scuppered a 2016 deal that Australia sealed with France to acquire 12 diesel-powered subs from shipbuilder Naval Group.

The snub is a personal blow for President Emmanuel Macron who hosted Australian Prime Minister Scott Morrison at the Elysee palace in June and vaunted their friendship at the Group of Seven meeting in the U.K. the same month. Le Drian had described the French-Australian submarine contract as the deal of the century.

Le Drian said he’ll be seeking explanations from the Australians over how they plan to exit their contractual obligations to Naval Group, though he didn’t explicitly call for financial compensation.

It also exposes the gulf between Paris and Washington since Biden took office. Macron has criticized the manner of the U.S. withdrawal from Afghanistan and questioned the efficiency of Biden’s suggestion of a patent waiver for Covid vaccines.

Le Drian said on Wednesday night that the submarine alliance highlights the need for the European Union to pursue its own “strategic autonomy,” meaning developing the capacity to act independently from the U.S. The EU’s foreign policy chief, Josep Borrell, is due to hold a press conference to discuss EU strategy in the Indo-Pacific region on Thursday afternoon.

France is the only European nation with a significant military presence in the region and it also has an overseas territory, New Caledonia, to the East of Australia.

Le Drian said that Naval Group, which is mostly state-owned, had met its commitments under the Australian contract. Thales SA, another state-owned company which has a stake in Naval Group and was due to supply defense systems for the submarines, said its financial forecasts wouldn’t be impacted by the breakup. A person familiar with the matter said no job cuts are expected for Naval Group as a result of the decision.