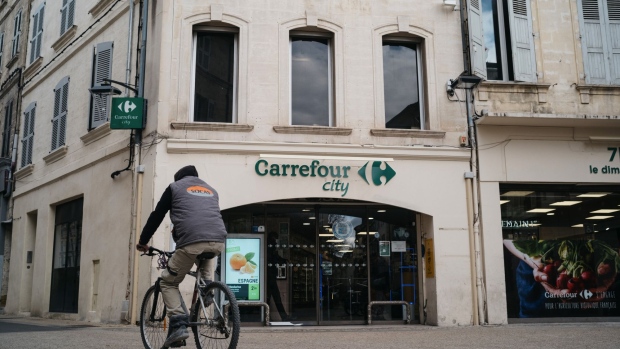 (Bloomberg) -- French grocer Auchan is exploring a fresh attempt at a takeover of domestic rival Carrefour SA, people with knowledge of the matter said.

Auchan has revived work on a potential deal for Carrefour after earlier negotiations collapsed in the autumn, the people said, asking not to be identified because the discussions are private. It has held talks with private equity firms about teaming up on a bid, according to the people.

Shares of Carrefour rose for the eighth straight day on Wednesday, the longest streak in four years. They rose as much as 6.6% in Paris, giving the company a market value of about 13.5 billion euros ($15.3 billion).

A combination with Carrefour would help Auchan’s founding Mulliez family create the biggest grocer in France and strengthen its position amid challenges from low-priced German rivals. Any deal would need the backing of Carrefour’s anchor shareholders, the Moulin family and Brazilian retail tycoon Abilio Diniz.

Deliberations are ongoing, and there’s no certainty they will lead to an offer, the people said. Representatives for Auchan and Carrefour declined to comment.

Carrefour’s talks over a sale to Canadian retailer Alimentation Couche-Tard Inc. collapsed in early 2021 amid strong opposition from the French government. Auchan later made an attempt to buy Carrefour at about 21 euros a share, or 16.6 billion euros, only to see discussions stall over price and structure, Bloomberg News reported in October.

A deal between two of France’s biggest grocers would come at a sensitive time, less than four months ahead of presidential elections in April. A combination could lead to job cuts following overlaps, while triggering antitrust scrutiny from regulators.

The French grocery market is seen as ripe for consolidation amid cutthroat competition from retailers such as Aldi and Lidl. The leader, Leclerc SA, has a 22.7% market share, followed by Carrefour with 19.4%, according to data from research provider Kantar. Auchan ranks fifth, with 9.2%.

(Updates with shares in third paragraph, elections in seventh paragraph)