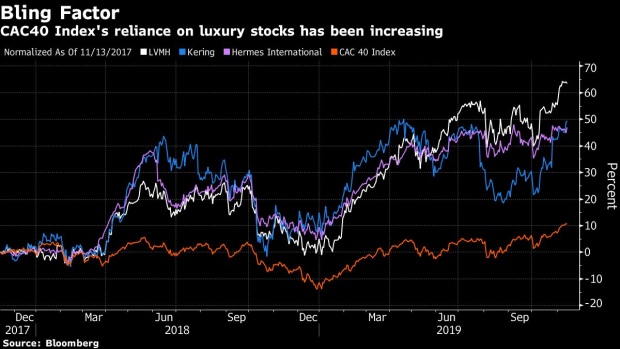 (Bloomberg) -- U.S. President Donald Trump’s proposed additional tariffs on $2.4 billion of French goods, ranging from handbags to sparkling wine and makeup, could be an overhang for months on shares of LVMH, Hermes International and Kering SA.

French luxury stocks fell 2% or more at midday in Paris, after the U.S. announced the levies. The stocks touched session lows in late morning as Trump, speaking in London, indicated that a trade deal with China may not happen for another year.

U.S. sales of the products targeted by Trump account for a relatively small portion of the companies’ earnings, traders and analysts said. And investors have learned that a threat of tariffs doesn’t necessarily mean they will ever be put in place. Still, for an industry already hurt by the U.S.-China trade dispute and Hong Kong protests, the news is unwelcome.

Some companies also are already taking action to stay on Trump’s good side: LVMH recently opened a new Louis Vuitton factory in Texas, part of Chairman Bernard Arnault’s efforts to hedge against trade tensions and build on the rapport he’s established with the U.S. president. LVMH last month agreed to buy Tiffany & Co. for $16.2 billion to expand its U.S. footprint.

France’s benchmark CAC 40 Index slipped 0.5% at 12:05 p.m. in Paris, dragged down by Hermes, LVMH and Kering, which owns the Gucci and Saint Laurent brands. The three stocks plus cosmetics company L’Oreal SA account for about 18% of the index’s weighting.

Here is what analysts are saying about the proposed tariffs:

To contact the reporter on this story: Albertina Torsoli in Geneva at atorsoli@bloomberg.net

To contact the editors responsible for this story: Beth Mellor at bmellor@bloomberg.net, Phil Serafino, Jon Menon