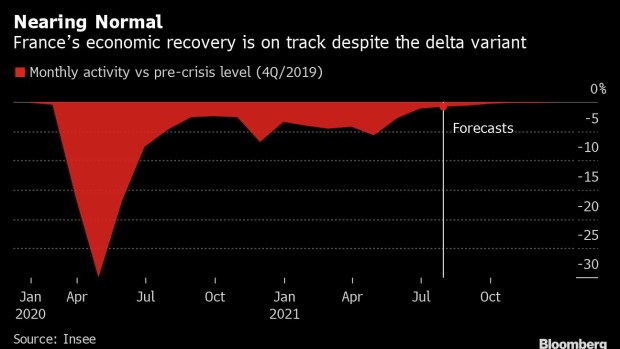 France’s economic outlook improved over the summer despite a surge in cases of the delta variant, suggesting an increased vaccination rate may have ended the stop-go disruption of the pandemic.

Confidence surveys and high frequency indicators monitored by Insee show activity continued to near pre-pandemic levels in July and August, and should get there by the end of the year. The French statistics agency also revised its 2021 economic growth forecast to 6.25% from 6% in July.

“The really notable fact is that the recovery continued despite going through a fourth wave of the epidemic,” Insee economist Julien Pouget said.

The report on the euro area’s second largest economy sounds a note of optimism for the currency bloc, where other indicators point to a worsening outlook due to rising coronavirus cases and supply disruptions. According to a survey earlier Tuesday investor confidence in Germany fell for the fourth month in a row.

The French government held off from imposing nationwide restrictions when the number of Covid cases rose again this summer, because it intensified a vaccination campaign that now has over 77% of over-twelves fully immunized.

The introduction of a health passport to dine out or visit museums and cinemas had only a moderate impact that will likely be temporary, Insee said.

While supply bottlenecks are putting a brake on production, like in Germany, Pouget said the tensions are stabilizing in some sectors and are not that surprising in a period of sharp economic recovery. While the situation could push inflation over 2%, Insee’s surveys only show a moderate change in wages and second round effects from higher input prices.

“Our scenario sees industry and in particular automobile production partly held back by these problems between now and the end of the year,” Pouget said. “That could be a positive element if the tensions unwind in the medium term.”