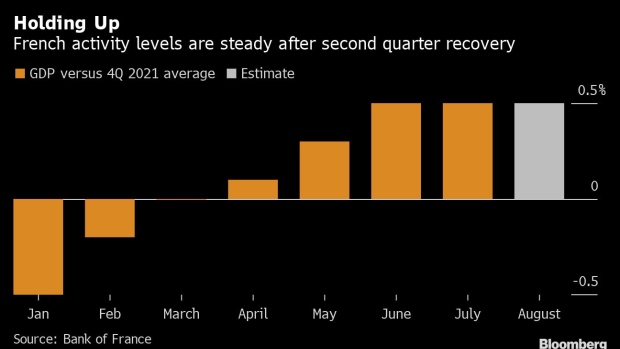 (Bloomberg) -- French economic output is stabilizing as a continued expansion in the dominant services sector compensates for weaker activity in construction and industry, the central bank said.

Output is holding steady in July and August at a level 0.5% above that seen around the end of 2021, the Bank of France’s monthly survey of about 8,500 companies and high-frequency data showed.

“In an economic environment that remains difficult with tensions on commodities markets and supply and hiring difficulties, activity continues to resist,” the central bank said.

The gauge of the euro-area’s second-largest economy provides some reassurance before what’s set to be a difficult end to the year, with households and firms under pressure from surging inflation and possible energy shortages.

Despite those threats, the Bank of France’s measure of business uncertainty declined across all sectors, reaching levels in services and construction around those recorded in “normal times” before the pandemic.

The central bank’s reading of supply difficulties in industry fell for a third month, while the survey also showed fewer companies are planning to raise prices.