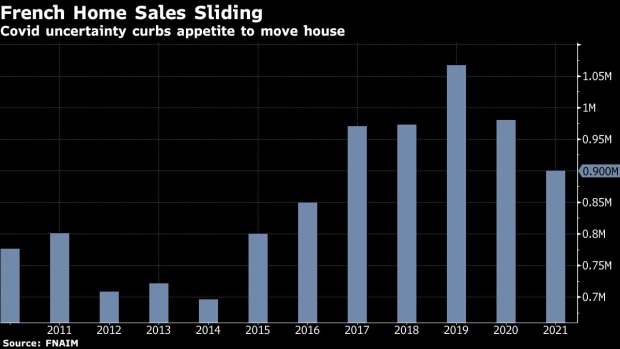 (Bloomberg) -- French real estate agents expect housing transactions to fall about 8% this year as economic uncertainty brought on by the coronavirus pandemic causes sellers to hesitate and makes it harder for some buyers to obtain financing.

Sales of existing homes in France are forecast to fall to 900,000, the lowest in five years, from 980,000 in 2020, according to data presented by national real estate federation FNAIM.

Low interest rates will continue to bolster home prices, while household confidence and the economy will be key to the number of transactions, the federation said. Finance Minister Bruno Le Maire has predicted a difficult first quarter for the French economy with a significant rebound possible in the second half.

“The evolution of the economic situation, unemployment, difficulties, the decline in the solvency of certain buyers will be decisive for the level of transactions,” FNAIM Vice-President Loic Cantin said at a news conference. “We’re headed toward less supply available on the market and will perhaps also face harder-to-finance households.”

A December survey among the federation’s members found that 47% observed an increase in banks refusing home loans in 2020, mainly due to a general tightening of credit restrictions.

France’s High Council for Financial Stability in December relaxed some recommendations for housing loans, lifting the ceiling for borrowing relative to income and allowing a larger share of loans to diverge from best practices.

Still, the FNAIM says caution by banks, particularly regarding home buyers who work in industries affected by the crisis, could be one of the main obstacles for the market in 2021. The French Banking Federation said in an email that banks aimed to “prevent over-indebtedness.”

French house prices are expected to be stable this year, meanwhile, with both supply and demand softening. That’s after rising 4% last year, with the market “remarkably resilient” despite the crisis and resulting lockdown measures, according to FNAIM Chairman Jean-Marc Torrollion.