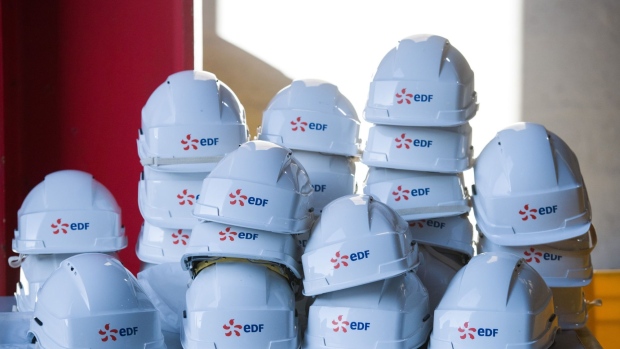 Safety helmets at the Penly nuclear power plant, operated by Electricite de France SA (EDF), in Penly, France, on Friday, Dec. 9, 2022. France's nuclear reactors are returning to the market just as the cold snap worsens, EDF's Chief Executive Officer Luc Remont said the restart of its units provides confidence that it can make it through a challenging winter. Photographer: Nathan Laine/Bloomberg , Bloomberg

(Bloomberg) -- France’s markets regulator said it’s planning to pause the government’s offer to take Electricite de France SA back into full state ownership, which would enable some investors who sold their shares to collect payment.

An official at Autorité des Marchés Financiers outlined the plan at a Paris court of appeals hearing on Wednesday. The AMF intends to set a provisional closing date for Feb. 3. It’s dependent on the court officially acknowledging the withdrawal of a claim by employee and minority shareholders against the government’s offer, expected later today.

Disgruntled shareholders had been seeking a court order to freeze a possible squeeze out pending the full examination of a lawsuit opposing the offer. The French government said on Jan. 24 that it won’t force minority shareholders to tender their shares before the court ruling on the lawsuit.

The EDF employee shareholders say in their challenge that the €12 per share offer undervalues the company. It is scheduled to be reviewed by the Paris court on March 23 and a decision is due by early May at latest.

If the court ends up backing the validity of the government plan, the AMF official said the regulator will re-open the offer period for at least 10 business days.

(Adds detail on timing of AMF action in second paragraph.)