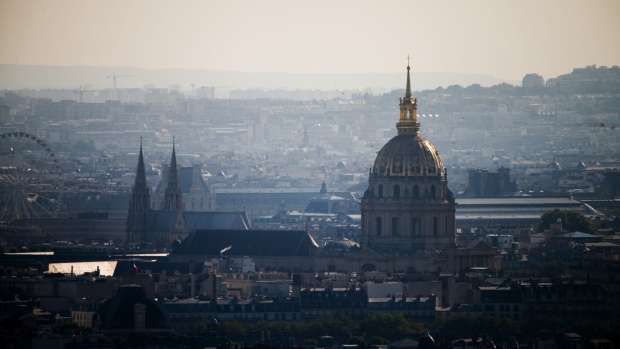 The Dome des Invalides church stands on the city skyline, as viewed from the Generali Baloon hot air research balloon as it performs air quality checks in Paris, France, on Saturday, July 18, 2020. The French state was scolded by judges for failing to properly tackle air pollution and given a six-month ultimatum to clean up or face millions of euros in fines. , Bloomberg

(Bloomberg) -- The French state was criticized and fined 10 million euros ($12 million) by top judges for failing to act decisively to improve the quality of air in several parts of the nation.

The penalty, handed down by France’s Conseil d’Etat on Wednesday, comes after a six month ultimatum was issued last year that ordered the government to improve measures to tackle air pollution.

While some steps have been taken, the administrative judges said that they won’t improve the pollution situation fast enough as their implementation and impact remains partially uncertain, according to a press release.

The 10 million euro fine covers the first half of 2021 and will go to Friends of the Earth, which had initially lodged the lawsuit, as well as several other associations that focus on tackling air pollution.

The Conseil d’Etat said it will again look at the government’s actions in the second half of the year and in 2022 to see whether additional penalties are warranted.

Last year, the judges said 10 million euros was the highest amount an administrative court has fined the state but it could be increased at a later date.