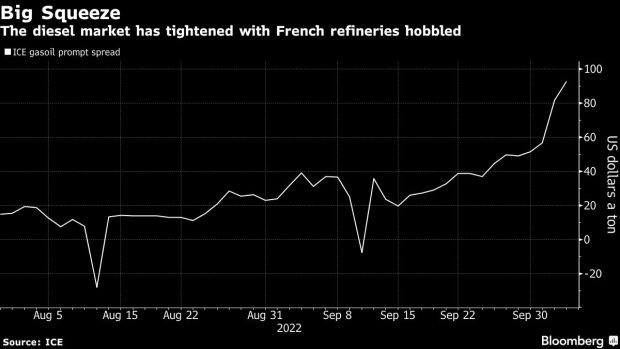 (Bloomberg) -- Europe’s diesel market is starting to run out of control again -- just as it did after Russia’s invasion of Ukraine sparked panic over supply of the industrial and automotive fuel.

Traders were willing to pay a premium of more than $100 to get a ton of diesel in October rather than having wait until November, according to ICE Futures Europe data at one stage on Wednesday. The month-to-month spread is an indication of how tight the market is perceived to be.

That concern about Russian supply remains, but it’s being compounded this time by a strike over pay at three large French oil refineries. Together with a recent fire, the industrial action means over 60% of the nation’s fuel-making capacity has been taken offline.

Oil trader Gunvor Group’s Chief Executive Officer Torbjorn Tornqvist said Tuesday that the diesel market is moving toward levels of tightness that were seen in the weeks after the invasion of Ukraine.

The French strikes “come at exactly the wrong time for Europe’s energy security, as they risk accelerating product stockdraws ahead of the looming embargo on imports of Russian products,” Facts Global Energy said in a note Tuesday.

The continent’s diesel sector -- which tightens around now as companies buy near-identical heating oil before winter -- has been on edge since the invasion of Ukraine, with traders already shunning Russian barrels.

The strikes have seen filling stations in parts of France start to run out of fuel -- another headache for consumers and industries hit by a cost-of-living crisis and the worst energy crunch in decades.

Diesel’s premium to Brent crude, or crack, in northwest Europe rose to more than $44 a barrel on Wednesday. The marker was about $12 a barrel at the start of October 2021.

In outright terms, diesel is trading at the equivalent of about $150 a barrel.