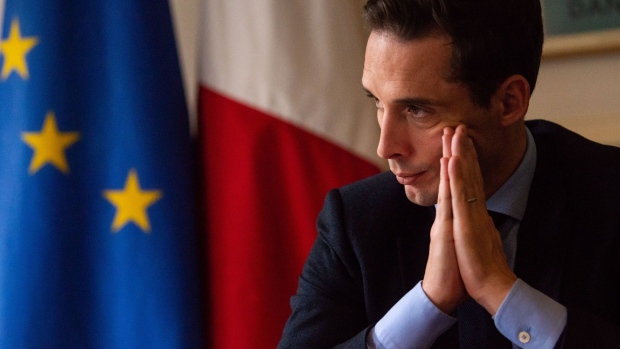 Jean-Baptiste Djebbari, France's transport minister, pauses during an interview at the transport ministry in Paris, France, on Tuesday, Oct. 27, 2020. Air France-KLM’s future as a combined company will be put to the test as France and the Netherlands prepare for critical talks on bolstering the weakened carrier’s finances, according to the French transport minister. , Bloomberg

(Bloomberg) -- French Transportation Minister Jean-Baptiste Djebbari said Tuesday that handling the rollout of new 5G wireless service near airports without disrupting flights was “simple” for his nation, adding that he has discussed the matter recently with U.S. Transportation Secretary Pete Buttigieg.

“I think it’s simple in a way,” Djebbari said in an interview with Bloomberg TV’s Annmarie Hordern. “When we had the topic, a year and a half ago, we made sure on the 17 major airports in France that we had some sort of a bubble protecting for 5G interference.”

He said they put safety first and once it was shown to not interfere with aircraft and “that it’s OK to be run in a larger spectrum, we can move on and that’s what we are doing.”

5G service in the U.S. has been at the center of a standoff between wireless network providers such as AT&T Inc. and Verizon Communications Inc. since the Federal Communications Commission awarded access to new spectrum, called C-band.

Airlines and other aviation-industry groups issued warnings about the potential for significant flight disruptions if the 5G airwaves were expanded, saying they could interfere with aircraft operations because of their proximity to the frequencies used by aviation equipment. Major disruptions were averted last week when AT&T and Verizon, in talks with the Federal Aviation Administration and other government entities, agreed to temporarily delay switching on hundreds of 5G cell towers near U.S. airports.

Djebbari, a pilot himself, said he has talked about the 5G issue with U.S. officials, including Buttigieg, while in Washington this week for meetings.

Djebbari also applauded the return of the U.S. to the Paris accord on climate change and called for stability in climate-change policy.

“The last two years, especially in the context of this new administration, I’ve seen things moving quite a lot,” he said. “The U.S., with the plan they’re running on infrastructure, it’s a big plan and we’re expecting it to be really, really efficient in terms of decarbonization.”

France has embraced electric vehicles -- Europe is projected by BNEF to account for 30% of global sales this year -- in part through government subsidies to encourage vehicle purchases and charging stations.

“We need to kickstart the industry,” he said.

Asked about the prospect of the U.S. changing course if a Republican like former President Donald Trump wins the next presidential election, Djebbari said: “We are not hoping for that of course. We’re very pleased to see that the U.S. went back to the Paris Accord when President Biden was elected.”