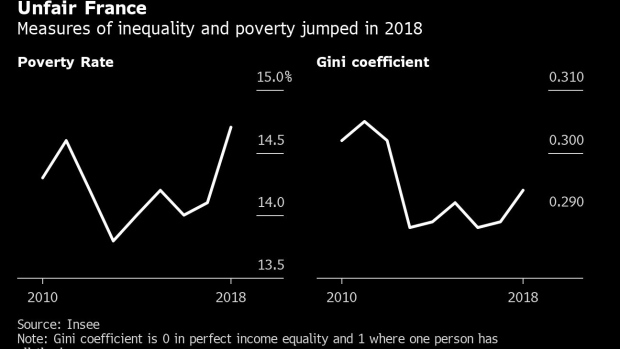 (Bloomberg) -- The French Yellow Vest protesters who took to the streets in 2018 alleging rising inequality and slamming Emmanuel Macron as a president of the rich had a point, according to data published Wednesday.

An estimate from national statistics office Insee shows inequality, as measured by the so-called Gini coefficient, last year registered its sharpest increase since 2010. The poverty rate -- the percentage of the population with a living standard below 60% of the median -- rose to 14.7% from 14.1% in 2017.

The study is a blow to Macron, who began his presidency in 2017 promising that cuts to taxes on capital and wealth would bolster France’s economy by making it a more attractive place to do business.

Insee said the increase in inequality in 2018 was linked to a sharp rise in investment incomes, which benefited from Macron’s introduction of a flat tax the same year. Cuts to housing benefits were the main reason for the rise in the poverty level, although Insee’s calculation doesn’t take into account a fall in regulated rents.

The Yellow Vest movement forced the president into a u-turn on fiscal policy that included raising pensions and cutting taxes for low earners. Those measures aim to boost the incomes of poorer households, but are only kicking in this year.

To contact the editors responsible for this story: Fergal O'Brien at fobrien@bloomberg.net, Paul Gordon, Andrew Blackman