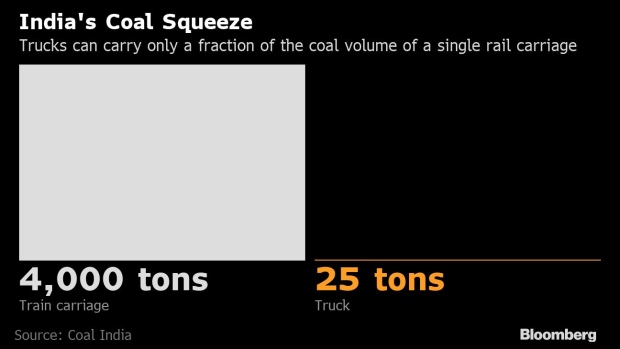 (Bloomberg) -- A coal supply crisis is brewing in India for a second year.

Coal India Ltd. is restricting deliveries to industrial consumers to prioritize power plants, with fuel stockpiles already below target levels and the country heading into a traditional summer demand peak.

The state-owned miner limited daily supplies to non-power sector users to 275,000 tons, according to an internal letter seen by Bloomberg. That’s about 17% lower than recent average daily volumes.

Limited availability of railway carriages means the producer has also asked production hubs to use trucks, rather than trains, to transport the majority of fuel to industrial customers, which is likely to slow down deliveries.

Coal India didn’t immediately respond to a request for comment.

Some aluminum producers -- typically among the country’s largest electricity users -- paid a 450% premium for domestic coal in March, according to the Aluminium Association of India. Smelters are anxious about supplies after suffering curbs on deliveries during last year’s energy crunch, and with elevated prices of seaborne coal making imports too expensive.

Freight capacity is being hampered by delays to the construction of two new rail lines, that are now expected to be completed in the financial year that runs through next March, according to Gaurav Krishna Bansal, an executive director at Indian Railways. The operator has also issued a tender to buy 100,000 more wagons to address limited supply of the carriages.

A single railway carriage, called a rake, can carry 4,000 tons of coal, while a truck can typically deliver about 25 tons.

“Asking buyers to carry coal for hundreds of kilometers by road is as good as not giving them any supplies,” said Rajiv Agrawal, secretary general at the Indian Captive Power Producers Association, which represents industrial consumers with their own power plants. “Carrying coal in trucks is an extremely inefficient, costly and polluting option.”