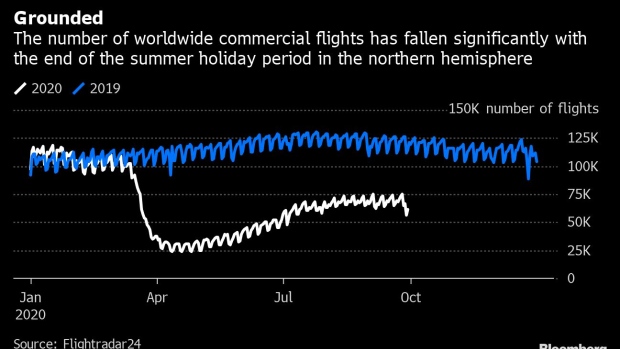 (Bloomberg) -- Autumn has arrived in the northern hemisphere, and with it a fresh slump in commercial flights that will alarm the world’s oil refineries as they struggle with a glut of jet fuel that’s crushing profitability.

The outlook for jet-fuel is crucial for the wider oil market as refiners are confronted by a two-speed recovery in demand from the coronavirus slump. While gasoline consumption has risen sharply as commuters shun public transport in favor of their own cars, demand remains depressed for diesel and jet-fuel.

The drop in flights would also alarm Saudi Arabia and Russia, the leaders of the OPEC+ alliance who, in two months time, will need to assess whether oil demand has recovered enough to relax their production cuts.

The number of daily worldwide commercial flights fell to a three-month low early this week, according to data from Flightradar24, a website that tracks flights in real time. Although daily numbers are fickle, the less volatile 7-day moving average also shows a drop, hitting the lowest since mid August.

Air traffic had been steadily recovering in the wake of the coronavirus, but there’s been a lingering question about what would happen when summer vacations came to an end in northern hemisphere countries.

While a seasonal decline in flights is to be expected, the recent drop seen in Flightradar24 data appears more pronounced than the comparable period last year -- and from a much lower base. Hopes for a recovery in traffic, which airlines had previously expected to begin in summer and improve through the end of the year, have faded as a rising spate of Covid-19 cases across the world have prompted the reinstatement of travel restrictions and forced airlines to scrap flights.

The Flightradar24 data showing a sharp drop at the end of September confirm anecdotal comments over the past few weeks from airlines, and a sombre outlook from industry associations. “Airlines are reporting very low forward booking rates until end of 2020 compared to normal,” Eurocontrol, an air-traffic-management agency, said Sept. 22.

The International Air Transport Association, a trade body representing major airlines, has cut its forecast for year-end. “The outlook has got darker, something I wouldn’t have believed possible just a month ago,” said Alexandre de Juniac, the head of the organization.

So far, oil refiners have been battling with the lack of jet-fuel demand by diverting as much of the fuel into diesel. But with diesel demand still well below normal levels, the extra output has added to a massive glut of the petroleum product, in turn eroding the overall economics of a normal refinery.

If jet fuel demand falls further during the fourth quarter, as the early data and forecasts suggest, it could inflate the diesel glut even more, piling even more pressure on refineries to scale back operations, or even close. That, in turn, would reduce demand for crude, complicating the efforts of Saudi Arabia and Russia to rebalance the global oil market.