Employment probably fell by about 160,000 last month, according a Bloomberg survey of economists ahead of Friday’s report by Statistics Canada. That would put a sudden stop to two months of strong gains that had brought Canada’s job numbers to within 10 per cent of pre-pandemic levels.

Despite the setback, analysts expect a quick recovery once containment measures have been lifted with the economy back on track toward full recovery -- as has been the case after previous lockdowns.

“It doesn’t change the fact that we see a very strong rebound in the second part of the year,” Jocelyn Paquet, an economist at National Bank of Canada Financial, said by phone. “It’s going to be a temporary pause in the recovery.” 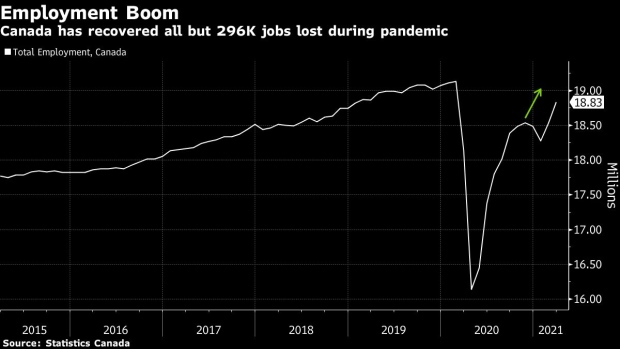 Rising virus cases due to a combination of rapidly spreading variants and a vaccine rollout plagued by delays and confusion prompted local authorities in recent weeks to reintroduce strict containment measures that are likely to hit jobs in pandemic-exposed sectors like food, accommodation and retail.

The report in Canada will stand in contrast to the U.S., where payrolls data also out Friday are expected to show a gain of about 1 million jobs in April as that country continued to benefit from a speedy vaccine rollout and loosening of restrictions.

But Canada’s jobs recovery has been stronger to date. The nation had recovered about 90 per cent of nearly 3 million jobs lost during the first wave of the pandemic, versus just over 60 per cent in the U.S. It’s one of the key reasons why the Bank of Canada has indicated it’s prepared to start paring back its stimulus before the Federal Reserve.

The country also has a strong track record of bouncing back prior waves of the virus, bolstering confidence it will do the same again. Investors are still pricing in a two-thirds chance of an interest rate hike over the next 12 months.