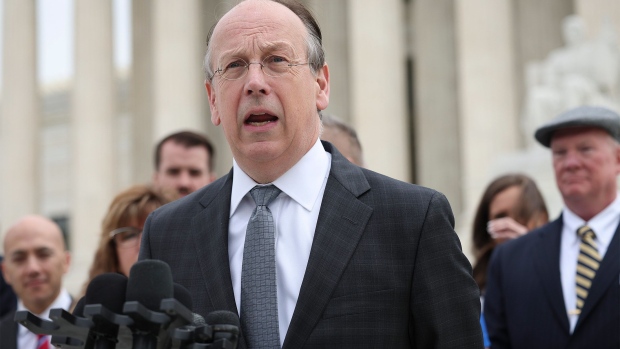 (Bloomberg Law) -- Paul Clement, the superstar advocate who won a major Supreme Court gun rights case on Thursday, is leaving Kirkland & Ellis after the firm announced it will no longer represent clients in Second Amendment matters.

Clement, along with former Kirkland partner Erin Murphy, said in a statement Thursday that they “were leaving Kirkland and forming an appellate boutique able to represent all their diverse clients.” Murphy has argued at the high court representing conservative platforms in high-profile matters, including partisan gerrymandering, campaign finance, and a bid to remove immigration protections for so-called Dreamers.

The decision to start their own boutique appellate firm was announced the same day Clement won his latest high court victory in a case expanding gun rights, the court’s first major Second Amendment ruling in over a decade.

In a statement, Kirkland said the firm will “no longer represent clients with respect to matters involving the interpretation of the Second Amendment.”

“Paul and Erin have been valued colleagues,” said Jon A. Ballis, Chairman of Kirkland’s Executive Committee said in the statement. “We wish them the best of luck in the future and we look forward to collaborating with them in the future in matters not involving the Second Amendment.”

In 2011, Clement made a similar move, leaving King & Spalding after the firm withdrew as counsel for the US House of Representatives in its challenge to the Defense of Marriage Act. The act, which defined marriage as between a man and a woman for all federal purposes, was eventually struck down by the Supreme Court.

“Unfortunately, we were given a stark choice: either withdraw from ongoing representations or withdraw from the firm,” Clement said in his emailed statement Thursday regarding the decision to leave Kirkland. “Anyone who knows us and our views regarding professional responsibility and client loyalty knows there was only one course open to us: We could not abandon ongoing representations just because a client’s position is unpopular in some circles.”

The former US Solicitor General during the George W. Bush administration, Clement is one of just a handful of attorneys who have argued more than 100 cases at the Supreme Court.

He argued four cases this term, the most of any attorney in private practice. In addition to the gun case, Clement argued on behalf of a former public school football coach who was let go for praying on the 50-yard-line before and after games. A decision in that case is still pending.

—With assistance from Greg Stohr

To contact the reporter on this story: Kimberly Strawbridge Robinson in Washington at krobinson@bloomberglaw.com