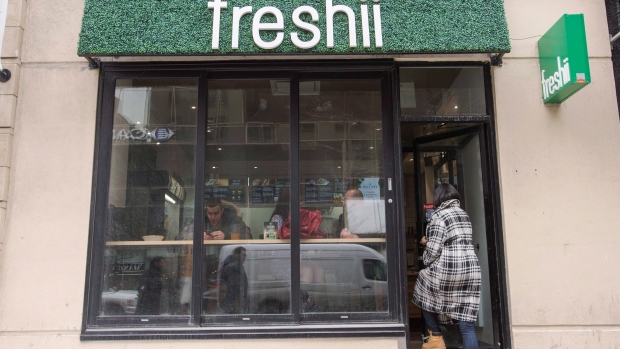 A customer walks into a Freshii restaurant in Montreal on Tuesday, March 21, 2017. The man behind Freshii restaurants is publicly appealing for a "partnership" with the much bigger Subway organization. Freshii's founder and CEO, Matthew Corrin, is calling for the conversion of "select" Subway sandwich shops to Freshii stores. , THE CANADIAN PRESS/Ryan Remiorz

TORONTO - Freshii Inc. has recorded a million-dollar loss in its first quarter as many of its restaurants remain temporarily closed due to COVID-19.

The Toronto-based company reported a net loss of $1.05 million for the 13 weeks ended March 28, compared with a net loss of $2.49 million in the same quarter last year.

Revenue totalled $2.89 million, down from $4.56 million in the same quarter last year.

The company said 43 locations remained temporarily closed at the end of the first quarter out of its 401 stores.

Freshii's total number of stores was down 10 from the fourth quarter of 2020 after it opened seven new stores in the quarter but closed 17 locations - the majority of which had not been open and operating since the first quarter of 2020.

But the company noted strong digital sales momentum in the quarter, with Freshii mobile app sales up 129 per cent compared with the year before.

“The Freshii restaurant network and omnichannel business lines have continued to demonstrate resilience, and have progressed well despite the ongoing challenges presented by the COVID-19 pandemic,” Freshii chairman and CEO Matthew Corrin said in a statement.

Founded in 2005, Freshii has restaurants in 15 countries around the world. It also sells nutritional supplement products in-store and directly to consumers via its online retail site.