UK Fiscal and Monetary Policies 'Out of Step': Blinder

The U.K. government and Bank of England are at loggerheads with barely more than 24 hours until the central bank is set to end the bond-buying program it launched to calm investors rattled by Prime Minister Liz Truss’s unfunded tax cut plan.

In a sign the government intends to make BOE Governor Andrew Bailey a scapegoat, Chancellor of the Exchequer Kwasi Kwarteng said late Wednesday from Washington that any fresh turmoil in markets would be “a matter for the governor.”

The mounting fear is that despite Bailey this week urging them to do so, stricken pension funds at the heart of this month’s selloff in gilts will not have unwound their positions and raised the cash they need by the time the BOE closes its £65 billion (US$72 billion) emergency backstop facility on Friday.

The deadline raises the risk of more market chaos next week and that some so-called liability driven investment strategies fail. That would heap pressure on the BOE to reverse course or require Truss and Kwarteng to find a solution themselves. Whoever blinks would do so knowing it would damage their credibility.

Both the prime minister and chancellor are already facing calls from fellow Conservative lawmakers to abandon the tax cuts and reductions in public spending amid the market rout and as the party trails in the opinion polls.

Markets have been in a tailspin since Kwarteng presented a £45 billion fiscal stimulus package on Sept. 23 without detailing how he’d pay for it.

Kwarteng and Truss argue that the measures are necessary to spur the economy into higher growth and have so far brushed off concerns from institutions like the International Monetary Fund and the BOE that the strategy risked adding to inflation pressures.

But one former Cabinet minister said a U-turn on tax is now inevitable, and predicted it would be announced by Kwarteng when he makes his fiscal statement at the end of the month.

If Truss was to revise her economic plan -- she has already been forced to cancel plans to abolish the top rate of income tax -- she would raise the question of what her premiership really stands for if it’s not a switch to the low-tax, small-state economy she promised in the Tory leadership campaign. 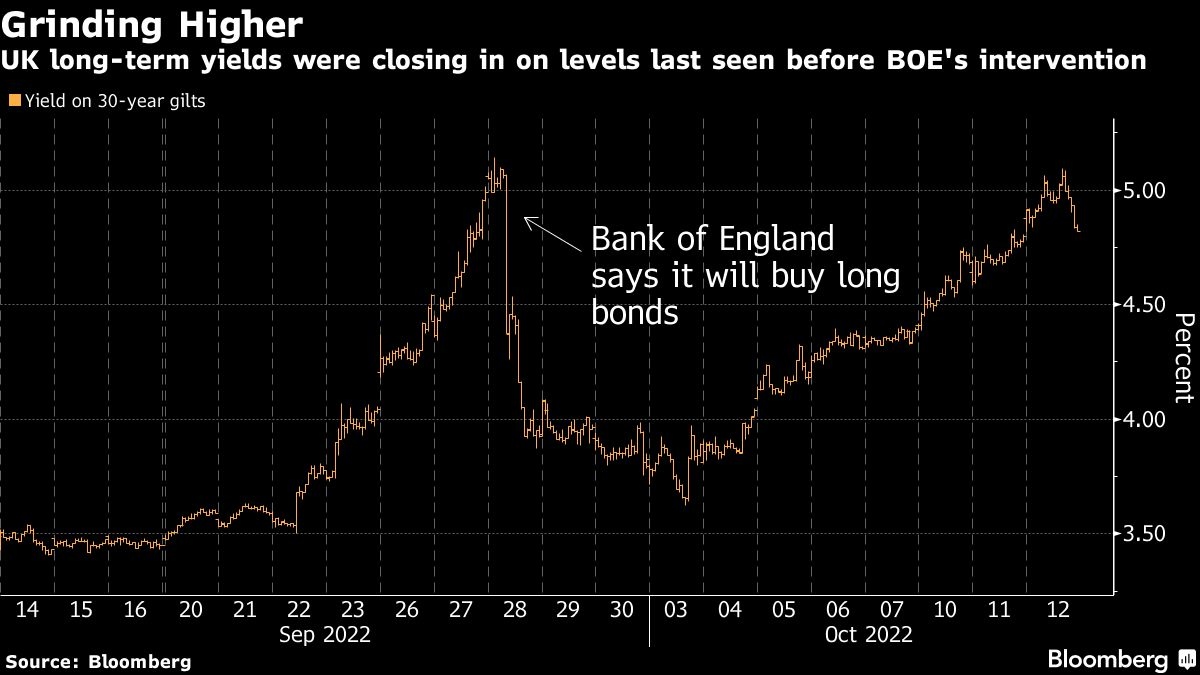 Bailey this week underlined his commitment to halting government debt purchases on Friday as planned, both to draw a line under a program that is complicating his efforts to tame inflation and to encourage pension funds to get on with closing their positions.

Traders will be anxiously watching Thursday’s tender to see whether the funds have listened. On Wednesday the BOE bought £4.4 billion of gilts in its biggest intervention since the package was launched on Sept. 28. Market conditions improved dramatically after the BOE’s move.

Even bigger purchases on the final two days of the operation would suggest that funds are hastily clearing their positions in preparation for the removal of the backstop. The BOE is offering to buy up to £10 billion of bonds on both Thursday and Friday.

“It would be a climb down, but it is still possible that the BOE will need to intervene in some form beyond the current end date. The onus is on the government to re-establish some form of confidence in UK assets by balancing the books. That won’t be easy.”

When the Bank introduced the emergency gilt purchases to head off a firesale of U.K. assets, it stressed that the intervention was a financial stability operation.

The problem is that the policy is a carbon copy of quantitative easing -- an earlier bond-buying effort intended to stave off deflation -- and that has clashed with the Bank’s signaling as it tightens monetary policy by raising rates and preparing to sell gilts.

Thank you both for the productive discussion on national and global economic issues. pic.twitter.com/AWHzWPvFMe

Bailey wants to draw a line under that confusion and restore market discipline, arguing that it is not a central bank’s job to bail out pension funds.

But he is again becoming a political football after months in which Truss and allies criticized the central bank for not doing more to beat back surging inflation. Hours before Kwarteng spoke, Business Secretary Jacob Rees-Mogg blamed the bank’s monetary policy for the market turmoil.

Asset managers, regulators and bankers are divided over how the next few days unfold.

Options include Bailey backtracking despite the risk that would pose to his standing and the BOE’s independence from politics. Alternatively, the government could devise its own plan to deal with the strains in the pension industry or reverse its stimulus push. Or the rout might not materialize with other liquidity programs still available.