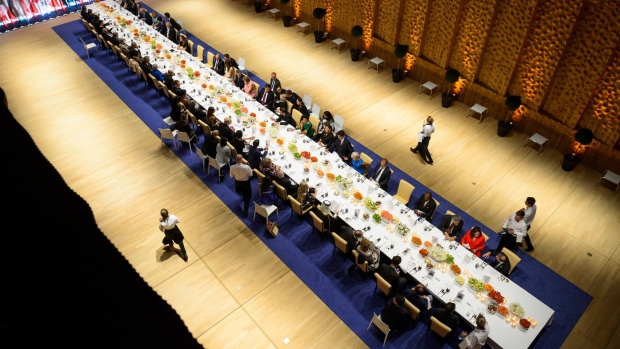 (Bloomberg) -- It’s a dinner like no other when your guest list includes the leaders of nations representing about 80% of the world’s gross domestic product and 75% of global trade. This year’s G-20 summit host, Indonesia, is pouncing on the chance to showcase its food, helping its efforts to make friends and influence people.

For the Bali summit, Chinese President Xi Jinping, Canadian Prime Minister Justin Trudeau and others dined al fresco, with a spread of beef rendang (Indonesia’s prized stew), steamed cod and asparagus in Balinese turmeric dressing, followed by Aceh chocolate mousse. Earlier on Tuesday in between a flurry of meetings, leaders sat down for a lunch of satay skewers, sirlion wagyu, vegetable rice, tempeh (a fermented soybean cake) and prawn crackers.

“We want [leaders and guests] to have a good impression about Indonesia,” the Indonesian Ministry of Foreign Affairs said in a text message. “So we serve them the variety of Indonesian food and present them with a glimpse of Indonesia’s rich culinary tradition.”

It’s part of what academics call gastrodiplomacy. “It’s a broader public diplomacy which is like trying to communicate using the culinary culture of the nation,” says Wantanee Suntikul, who has been studying the topic for 13 years and taught tourism studies at The Hong Kong Polytechnic University.

“For so-called middle-power countries, if you don’t have a strong military or a powerful media, what else do you have? So food as part of cultural soft power can be very political,” says Suntikul, now a scholar in residence at the University of Cincinnati’s Carl H. Lindner College of Business.

A succession of G-20 hosts have handled banquets in various ways. Argentina, the first South American nation to host the G-20, served a meat-heavy menu in 2018 featuring ribeye steaks, Patagonian lamb and street-food-style choripan sausage sandwiches, around the time then-president Mauricio Macri was hashing out details of restarting raw beef exports to the US.

For China’s 2016 banquet, Xi gave a speech about how the G-20 was a “bridge of friendship” as leaders including then-US-president Barack Obama feasted on sweet and sour fish with toasted pine nuts, tea-infused shrimp, orange-flavored crab meat and Hangzhou-style fillet steak. The meal was presented in hand-painted ceramic cloches commissioned by Chinese First Lady Peng Liyuan. Guests also sipped wine from a Beijing-based chateau.

“Food has always been a universal language cutting across boundaries and barriers,” a report by the state-run China News Service said at the time. “This is a meal worthy of the best international diplomacy.”

At the last G-20 held before the pandemic shut down in-person summits for two years, Japan served artfully garnished plates of deep-fried anglerfish, Tajima beef baked on bamboo charcoal, sweet corn flan pinned with edible flowers and matcha desserts. Along with snifters of sake and wine, Japan said it handed out menu booklets in 15 languages explaining its cooking techniques and how the chefs put sustainability at the heart of the menu.

Suntikul says successful gastrodiplomacy campaigns can yield long-term economic benefits, such as increasing exports. “The more people know or are familiar with the food, and as ethnic restaurants expand overseas, it could lead to demand for marine or agricultural exports,” she says.

The term gastrodiplomacy was coined by The Economist in a 2002 article about Thailand’s project to increase the number of Thai eateries around the world, by helping finance the businesses and certifying authentic restaurants abroad.

Suntikul, the scholar, says for the G-20 summit, Indonesia needs more than a night of beef rendang to make an impact. “How would you make a good impression in a one-hour dinner while leaders are talking? The government needs more of a chance to tell more of a story and you need a very grounded campaign built up over years.”