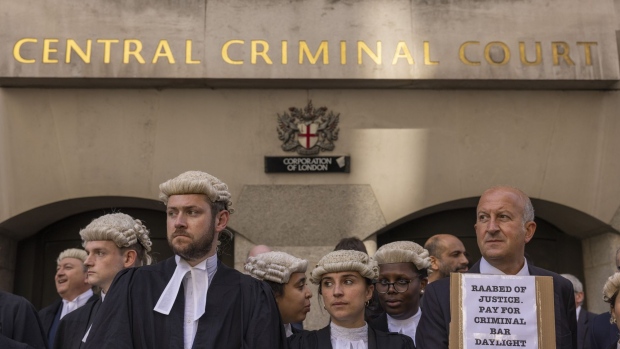 (Bloomberg) -- Britain’s criminal trial lawyers are overworked, underpaid and looking where else they can take their talents.

Highly qualified barristers are leaving the profession in their droves. As many as a quarter of junior barristers have quit in the last five years, with numbers in the profession dropping by 38% a year. Struggling to earn minimum wage in a justice system that’s falling apart at the seams has forced them to diversify their practice or try something new entirely.

Thousands of criminal lawyers, who defend some of the poorest and most vulnerable in England and Wales, walked out indefinitely this month in response to the persistent underfunding and low legal aid fees in a row with the government that’s far from over.

“There’s a talent drain from the criminal bar,” Kirsty Brimelow, the chair of the Criminal Bar Association which represents thousands of the striking barristers, said. “That’s a really serious issue because it means the judges of the future are also drained away.”

The UK’s summer of stoppages has spread far and wide as workers protest low pay and poor working conditions against the backdrop of an escalating cost of living crisis and rising inflation. With disruption across the railways, airlines and docks the country has seen the most sustained industrial action since the early 1970s.

Britain’s Once Prized Criminal Courts Are Well and Truly Broken

The opportunities for these lawyers are clear -- there’s a battle for talent at London’s top commercial law firms where newly-qualified lawyers can earn well over £100,000 ($113,050) a year while average profits for equity partner at the most prestigious outfits topped £2 million for the first time this year.

The pay gap between freshly-minted corporate and criminal lawyers now stands at as much as £150,000, according to analysis by recruiter Tenhaven.

“City law firms will be licking their lips with this, they’ll have skilled people that they don’t need to train up in the same way,” Oliver Renton, a criminal barrister at Crucible Chambers, said. “They’ll know how cheap they are.”

One such firm, Peters & Peters has two criminal barristers among its six business crime partners. Another, Fieldfisher hired two barristers as partners, and two as associates, for their new corporate crime team while other firms are looking to secure similar moves, according to Tenhaven managing director Akshay Nayak.

“We have seen a marked increase in the number of barristers turning their backs on the Bar to move into private practice over the past 18-24 months,” Nayak said. “At the same time, many of the best law firms are fighting a war for talent. Demand is outstripping supply in most practice areas, and this means firms are more open to hiring from non-traditional talent pools, including barristers or those with a regulatory background.”

The situation is so dire that some barristers have even decided to turn their backs on law altogether. Alejandra Tascon, the chair of the Young Bar Association, said one unidentified barristers’ chambers lost all of its trainees in the last two years. Out of a cohort of six, five of them did not complete the training and left to do other jobs like teaching. The one that stayed left after three months.

Chloe Barton, 38, left the criminal bar after 11 years in 2017 to join the transport regulator where her skills were in high demand and the hours and pay were much better. Junior barristers can take home as little as £77 for some hearings before deducting travel and office costs.

“It got to the point where it didn’t matter how much I loved my job, I just couldn’t do it anymore,” she said in an interview. “A piece of my heart is always with the criminal bar because it’s vocational. People don’t become a criminal barrister to become rich.”

In her new role, Barton was responsible for prosecutions that the regulator brought for those committing health and safety breaches. Her employer was keen for her to use her bar experience and she was able appear in court sometimes. She now works for a private rail company as a legal adviser.

The CBA is hoping to thrash out a deal with new Justice Minister, Brandon Lewis, to improve upon the 15% fee hike already on the table. Until then criminal courts are at an effective standstill leading to trial delays involving some of the most serious violent crimes -- with the case backlog at an all time high.

The Crown Court backlog was 59,992 at the end of July, according to His Majesty’s Courts and Tribunals Service figures as of Sept. 8. The backlog in Magistrates Courts, that deal with the majority of criminal cases sending the most serious to the Crown Court, stood at 353,861.

“I have so much admiration and respect for anyone that’s stayed,” Barton said. “With more and more people leaving there’s more work and cases than ever.”