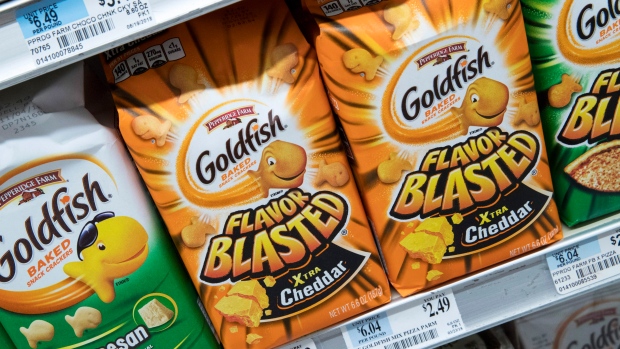 The snack aisle has perhaps never seemed so perilous.

Among the products affected sold in Canada are Pepperidge Farm’s Goldfish Flavour Blasted Xtreme Cheddar, Mondelez’s Ritz Bitz Sandwiches in the cheese and pizza flavours and Loblaw’s chicken fries and No Name chicken nuggets. In the cases of the recalled Goldfish and Ritz products, the source of potential salmonella came from whey powder produced by suppliers, according to spokespersons from Campbell Company of Canada and Mondelez.

The recent slew of recalls may be related to seasonal weather conditions, according to Sylvain Charlebois, a professor of food distribution and policy at Dalhousie University.

“With salmonella and E. coli, especially this time of year, because temperatures are much higher, bacteria has a greater chance of survival,” Charlebois said in a telephone interview with BNN Bloomberg.

“That’s why companies tend to conduct a lot of recalls from May to September, October … but most of them are usually preventative.”

Food recalls may also appear to be occurring more frequently lately as companies have improved capabilities to detect food safety risks, according to Keith Warriner, a professor of food safety at the University of Guelph.

“From the outside, it seems like the food system is falling apart because of the increased incidence of food recalls,” he told BNN Bloomberg in a telephone interview.

“Not so long ago, even 10 years ago, we would be totally oblivious to salmonella, listeria, in our food because the testing hadn’t advanced enough. But really there are more food recalls now because of better detection technology.”

It’s not clear how these recalls will affect margins.

“We are not focused on that right now,” a spokesperson for Campbell’s, which owns Pepperidge Farm, said in an emailed statement when asked how the Goldfish recall will impact the company’s bottom line. Mondelez and Loblaw declined to comment on the same question.

But when it comes to brand reputation, the impact will likely be minimal, according to Charlebois.

“The cases you hear [about] are major brands and people remember them, but they often survive these recalls because of the resources they have,” Charlebois said. “SMEs, small and medium-sized businesses, tend not to survive these things.”

Key to containing any potential brand fallout is communication, according to food marketing professor Charlene Elliott.

Research “suggests that early and complete disclosure promotes trust with consumers, so effective communication is really central to managing perceptions of an exposure to risk,” said Elliott, who teaches at the University of Calgary, in a telephone interview.

“If you take a look at Pepperidge Farm, for example, they announced a voluntary recall,” she added. “Nobody’s been sickened by it, so it isn’t after the fact. And they’re taking precautions by notifying consumers to either discard the product or return it for a refund, right? They are really effectively following a strategy that works to promote trust with consumers.”

Consumers, on their part, “shouldn’t be over-alarmed,” Warriner said, adding that while they can’t control the food-creation process, they can protect themselves by making note of food safety recalls and making purchasing decisions cautiously.