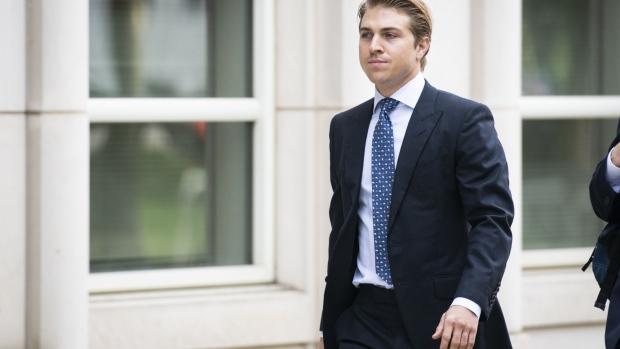 (Bloomberg) -- Working for Tom Barrack took Matthew Grimes to some exciting places -- he flew on private planes to international destinations, lived on a $15 million estate and even partied at the inauguration of former President Donald Trump.

That glittering life came to a halt when Grimes, 27, was arrested at around 6 a.m. on July 20 in Santa Monica, California. His 74-year-old former boss was arrested a few hours later at an office park in the San Fernando Valley. He and Barrack appeared in a Brooklyn courtroom Monday and pleaded not guilty to charges that include acting as unregistered foreign agents trying to influence U.S. policy on behalf of the United Arab Emirates.

Barrack had a penchant for prizing loyalty and personal ties over experience in hiring and promotion. Now Grimes’s loyalty to his mentor will be put to the test, as federal prosecutors are likely to push him to make a cooperation deal and testify against Barrack.

“Matthew Grimes is innocent, and he is looking forward to his day in court,” Matthew L. Schwartz, an attorney for Grimes, said in a statement. “He is incredibly grateful for the overwhelming and unwavering support of his family and friends.” A spokesman for Barrack declined to comment.

Before his arrest, Grimes was living in the guest house of a $15 million home that Barrack owns in Aspen, Colorado, according to a person familiar with the matter. He took at least 50 international trips with his boss over five years, according to prosecutors. He was a witness in Special Counsel Robert Mueller’s probe into interference by Russia and other countries in the 2016 election, people familiar with the matter said.

At the time of his arrest, Grimes was listed as a managing director of Falcon Peak, a family office created by Barrack. He was also president of a related special purpose acquisition vehicle that his boss was preparing to take public, before those plans were scrapped last week. Grimes had a bank account with $1 million in it -- an amount that a judge has ordered be transferred to an escrow account to pay legal fees.

After the arrest, Grimes was held in a San Bernardino county jail for four days. He was released Friday on $5 million bail secured by his parents and brother. His parents, Brett and Marisa Grimes, put up their $2.5 million home in Santa Barbara, California, as collateral, along with $2 million in a retirement account. Grimes’s father didn’t respond to emails or messages left with his office.

Barrack, who had been held in the same San Bernardino jail, was freed on $250 million bail. Among the terms of his bail: he cannot have any contact with Grimes.

Barrack has depicted Grimes as a financial prodigy, bragging that he graduated in three years with an economics degree from the University of Pennsylvania’s Wharton School, Trump’s alma mater. A prospectus described Grimes as working for Barrack’s Colony Capital Inc. since 2012 -- the same year he graduated as valedictorian from Bishop Garcia Diego High School, a Catholic school in Santa Barbara.

One of Barrack’s sons attended the school two years behind Grimes, who played on the tennis team. Grimes entered the Barrack family circle when he worked at an event hosted by the investor’s wife at the time.

Grimes was hired at Colony Capital as an intern, according to a person familiar with the arrangement, and was so successful that he kept his Colony email address and continued to do research for the company while attending college. One company executive from the period doesn’t recall seeing Grimes in the office regularly until about 2015.

He was part of an exclusive group at Colony Capital, people known as “Friends of Tom,” or FOTs -- favored staffers prized for their loyalty in a company considered clubby by the rarefied standards of high finance. Grimes even had an email address on Barrack’s private domain.

Constantly by Barrack’s side as he traveled to investment conferences around the world, Grimes spoke little himself and in public appeared to function as a personal assistant, often carrying his boss’s bags for him. Short, fit and blond, Grimes is described by those who know him as smiling, helpful and able to find his boss at any time. Aboard Barrack’s private planes, Grimes would graciously serve tea and crackers, and was sometimes called upon to book restaurant reservations.

An indictment unsealed July 20 charged Grimes, along with Barrack and UAE citizen Rashid Al Malik Alshahhi, with conspiracy and acting as an agent of a foreign government. Barrack also was charged with lying to FBI agents in a 2019 interview about his actions on behalf of the UAE.

Prosecutors said Grimes relayed messages back and forth between Barrack and Emirati officials, reassuring them that Barrack was “working hard” for them. At one point, the Emiratis asked Grimes to arrange a secure smartphone and download an encrypted messaging application for communication with Barrack, according to the indictment.

According to prosecutors, Grimes solicited Emirati input for an opinion article by Barrack supporting the UAE. He attended a meeting in Morocco where Barrack laid out what he could do to further the UAE’s foreign policy goals in the U.S. He helped coordinate discussions on major issues including the UAE’s desire to have the Muslim Brotherhood designated as a terrorist organization. He was also involved in the UAE’s effort to push their pick for U.S. ambassador and on U.S. support for the blockade of Qatar.

Whether Grimes will remain loyal is now a looming question.

Given his proximity to Barrack, prosecutors may try to secure the cooperation of Grimes against his boss, according to lawyers not involved in the case. Prosecutors may have avoided approaching Grimes before the indictment so he wouldn’t tip off Barrack, said Shawn Crowley, a former co-chief of the terrorism unit in the Manhattan U.S. Attorney’s office.

“The government will sometimes charge lower-level individuals to generate leverage and convince them to flip against the person at the top of the indictment,” said Crowley. “Approaching someone while the investigation is not yet public, or not yet overt, risks them tipping off the other targets.”

At a bail hearing last Tuesday in Los Angeles, prosecutors said their case against him was “overwhelming” and said he was “a serious flight risk” because of his access to Barrack’s vast finances and private aircraft. On Friday, Grimes was released after being fitted with a GPS ankle bracelet that tracks his whereabouts. He’s also subject to a curfew and can no longer use private planes, a California judge ruled.

His arrest last week was not the first time he’s drawn the attention of investigators -- he’d previously been interviewed by Mueller’s investigators. Grimes also testified over two days to a grand jury, a person familiar with the matter said.Barrack told Bloomberg News in 2017 that he prized loyalty from his employees, rarely firing workers and sometimes making unorthodox hiring decisions, like a former spokesman for the Church of Scientology.

“I err on the side of loyalty over top performance for sure,” Barrack said. “I’ve hired people from a reservoir of unusual places versus going to Wall Street and saying, ‘I’m going to go steal someone from Goldman Sachs.’”