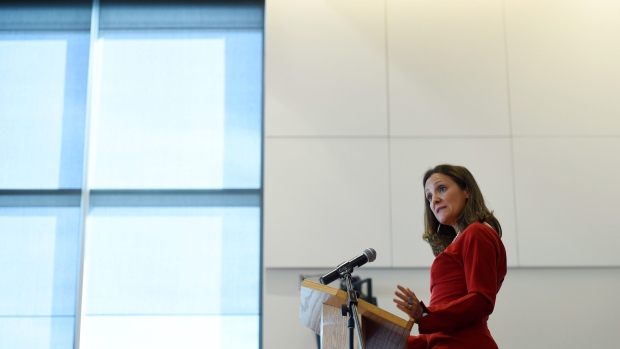 OTTAWA -- Chrystia Freeland has given Canadians a look at their government's strategy as it prepares to go nose-to-nose with the country's biggest trading partner in crucial NAFTA talks.

The Canadian list, far shorter than the one released last month by the United States, sets out about a half-dozen goals that involve playing both offence and defence.

They include a push for more access to government procurement, improved mobility for professionals, protecting Canadian rights to supply management and an openness to reform of the investor-state dispute settlement process, as long as it ensures governments hold on to their right to regulate in the public interest.

"As in any trade negotiation, we have some areas of our offensive interests, areas where we think the agreement can be strengthened and improved," Freeland said after outlining her goals in a speech.

"And we have some areas where we believe the agreement currently serves its purpose and areas that need to be preserved in the national interest."

Freeland also announced the government's plan to call for what she labelled as new "progressive" elements in NAFTA 2.0. The proposals include stronger labour standards, tougher provisions to protect the environment as well as chapters on gender and Indigenous rights.

She insisted these are all areas in which she believes Canada can find common ground with the U.S. and Mexico.

Negotiators plan to use provisions from Canada's recently negotiated trade agreements with the European Union and Chile as guidelines for these chapters, Freeland added.

"Progressive elements are also important if you want a free-trade deal that's also a fair-trade deal," she said in a question-and-answer session following a speech at the University of Ottawa.

The government highlighted these goals at a time of rising international concerns that trade deals will only inflict more damage on the environment and accelerate a hollowing out of the middle class.

The government's other priorities include its desire to ease the flow of cross-border business by loosening bureaucracy and harmonizing regulations.

The negotiating team will also work to maintain key elements of the 23-year-old deal, including the dispute resolution process to ensure anti-dumping and countervailing duties are only applied when truly warranted.

Freeland warned that Canadians should brace for some tense exchanges during the NAFTA talks.

"I think we all do need to be prepared for some moments of drama," she said. "We should just see that as an expected part of any trade negotiations."

"There's nothing in here that the American's will trigger off and say 'that's terrible, we're walking away, we're not going to talk to you,'" he said in an interview Monday. "So, this is just an invitation to the dance."

"The more fundamental document, of course, is the American document," he added. "Which spells out in more details the kinds of things the Americans will want to discuss, and she doesn't address any of that here. This to me is just a place-filler."

On Tuesday, Freeland will consult labour leaders on NAFTA in Toronto. She will be in Washington on Wednesday where Canadian negotiators will sit down with their American and Mexican counterparts for the first round of talks.

By comparison, the list produced by Freeland on Monday was far more succinct.

Derek Burney, Canada's former ambassador to the U.S. who was directly involved in negotiations for the Canada-U.S. Free Trade Agreement and NAFTA, was in the crowd for Freeland's speech.

Burney, who also served as chief of staff for former prime minister Brian Mulroney, told The Canadian Press afterwards that it was important for Freeland to signal Canada intends to defend its interests.

Going forward, he said Canadians must continue to stress to the Americans that trade between the two countries is roughly balanced.

"They have to understand that -- that they're not being had by Canada in a trade agreement," said Burney, who participated in a Trudeau cabinet meeting earlier this year with Mulroney and Canada's current envoy to Washington, David MacNaughton.

"The big question mark for me is, what will be the price of victory for Donald Trump? We don't know that yet."