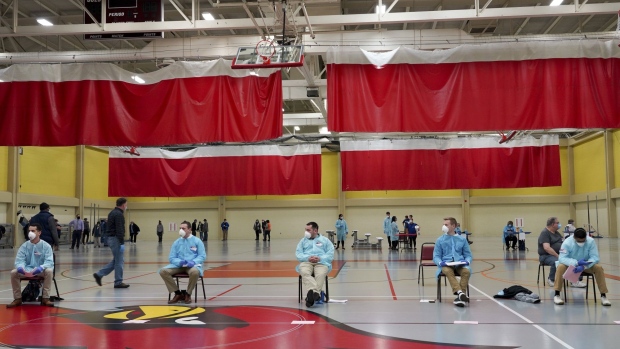 An election official wearing a protective mask disinfects a voting privacy booth at a polling location in Miami, Florida, U.S., on Tuesday, Aug. 18, 2020. Voters across Florida head to the polls to choose their party's nominees for a number of important elected offices, including congressional seats, county commissions, state attorneys, sheriffs and mayors among others. , Bloomberg

(Bloomberg) -- In April, Milwaukee showed just how badly things can go wrong when Covid-19 collides with an election. Many of the city’s aging poll workers were too afraid to show up, forcing all but five of 180 polling places to close and masked voters to line up for blocks.

With the virus flaring again and President Donald Trump urging people who mail ballots to also go to the polls on Election Day, an eclectic assortment of companies, civic groups and professional sports teams are working to keep a Wisconsin-style repeat from going national in November.

The NBA and NFL are making arenas and stadiums available for voting sites. Some teams are even paying workers to staff early-voting locations. And a newly formed group called Power the Polls -- whose backers include Microsoft, Patagonia and MTV -- is recruiting a new generation of poll workers: younger, less vulnerable to Covid-19 and more technically adept than those who have long operated democracy’s basic machinery.

Employees, customers, students, off-duty National Guard members and even entire professions are being corralled to staff polling places and keep them from closing. This week, Power the Polls reached its goal of recruiting 250,000 young workers.

“We face a critical poll-worker shortage after the pandemic, and it’s no mystery why,” said Scott Duncombe, co-founder of the group, whose supporters also include advocacy organizations that lean left, such as unions, the NAACP and the American Civil Liberties Union. “Over half of poll workers are over 60.”

The new recruits have signed up amid fierce battles over voting. For years, Republicans have tried to restrict access to polls, saying new rules are meant to ward off fraud -- which is surpassingly rare. Democrats have accused them of trying to keep disenfranchised people from exercising their rights. In recent months, Trump has said mail-in voting during the pandemic can’t be trusted and has repeatedly raised the specter of a rigged election.

During a visit to North Carolina on Wednesday, Trump told supporters to send in “unsolicited ballots” early “and then go and vote” to ensure they are counted, a suggestion that prompted state election officials to warn voters against trying to vote twice, which is illegal.

With confusion and toxic partisanship mounting by the day, election administrators from both parties are eager for all the help they can get. A Power the Polls virtual town hall on Tuesday drew state election heads that included Republicans Frank LaRose of Ohio, Brad Raffensperger of Georgia and California Democrat Alex Padilla. “There’s not a state in the country that doesn’t need help,” Padilla said. ”There’s not a county in California that doesn’t need help.”In Ohio, which needs 35,000 poll workers, state officials are looking at tapping off-duty National Guard members and also recruiting accountants.

After a botched Georgia primary in June, the NBA’s Atlanta Hawks trained and paid employees -- most under 30 -- to staff the bottom floor of its 700,000-square-foot arena as the state’s largest early-voting location.

By next month, the Hawks will have more than 200 new poll workers at the arena, and running the election will be the team’s full-time job, said vice president David Garcia.

Power the Polls started in June and has a $2 million social-media budget. It’s been pitched by Trevor Noah on “The Daily Show” as well as online, at rallies, on campuses and by volunteer organizations. It’s backed by a long list of businesses that are both funding the outreach and leveraging their own employees as poll workers.

Old Navy, which is owned by Gap Inc., announced its program this week. It’s offering a day’s pay to any of its 50,000 workers, whether they were scheduled for a shift at a store or not. About 64% of the company’s 50,000-plus employees are from 18 to 29, said spokeswoman Taylor Frazier.Power the Polls uses social media and local civic or activist organizations to find younger people willing to work the polls, then collects their information and connects them with election agencies.In a handful of swing states that have had poll-closing issues, including Wisconsin, the organization is working with ACLU chapters. The goal is to ensure elections officials don’t close polling places unnecessarily or are wary of the new, third-party help. Most “are not used to recruiting outside of the usual suspects,” said Power the Polls’ Duncombe.“We can say, ‘We have 100 workers -- why are you closing?’ ” he said. “We’re not trying to be hard-ass, but we do want to help bring accountability.”

The recruited workers bring more than youth and numbers, he said: They’re typically more diverse than the older generation and have more language skills. In a year when many precincts across the U.S. are using new computerized voting systems, they’re also “a little more comfortable with technology than the over-60 crowd.”

Some workers at the precinct level are only too happy for the young help, as Zach Plants, a 22-year-old divinity student, discovered after being recruited in Georgia.Plants heard about the poll-worker shortage in June at a Black Lives Matter rally on a Sunday, signed up Monday and worked his first election on Tuesday in a heavily Republican area on the outskirts of Rome. With no time for training, he assumed he would be asked to hand out “I Voted” stickers.

He was not. The state was using a brand-new computerized voting system.“They said, ‘You look young. Could you log into all of the poll machines and set them up?’ They handed me a sheet of paper with passwords. And that’s what I did. I set up the machines.”