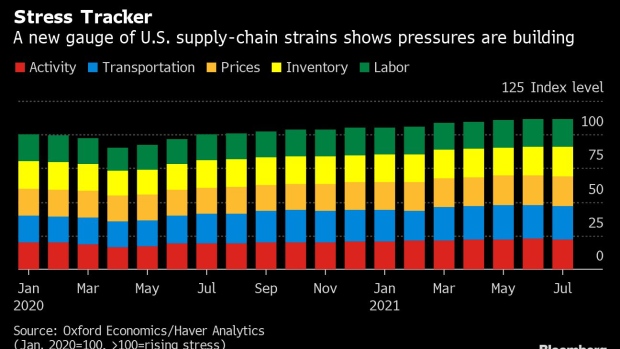 A forklift moves a container at the Ports of Auckland terminal in Auckland, New Zealand, on Thursday, Sept. 16, 2021. New Zealand’s economy was expanding at more than twice the pace forecast by economists before a nationwide lockdown interrupted its momentum, latest data show. Photographer: Brendon O'Hagan/Bloomberg , Bloomberg

(Bloomberg) -- Visit Maryland, the proud crab capital of the U.S., and sandwiches made from the meat of Chesapeake blues cost more than triple the normal price, if they’re available at all.

In Bucharest, Romania, a family waits about six months for a new Hyundai Elantra because of the auto industry’s global microchip shortages.

A parent in Nairobi, Kenya, struggles to find antibiotics for a child’s ear infection after consulting 10 local pharmacists. One of them checked with the central warehouse. None there either.

From high-class problems to difficulties finding life’s necessities, the pandemic has convulsed global supply chains on such a scale that few industries, socio-economic classes or regions are immune. Most experts see at least another six months before any return to normal.

The blame lies in several places, but Covid-19 has essentially robbed the global economy of its rhythm. From deck hands on fishing boats to short-order cooks, cheap labor has become scarce as workers fall ill or stay away from work out of fear for their health -- relying on government safety nets in the meantime.

The stockpiling of raw materials has caused shortages and delays that create yet more disruption downstream, forcing factories to slow production of finished goods. When products are ready to ship, it’s a struggle to move them smoothly or cheaply across borders and oceans.

For consumers, the turmoil has revealed the vast distances that goods actually travel to arrive on their doorsteps. For companies that spent decades building worldwide production networks, the debate is intensifying: move manufacturing closer to consumers or watch less-sprawled competitors prosper even more in this environment.

“We’ve actually been a beneficiary through this recent cycle because we are a proximity manufacturer with not a lot of instances of very long supply chains,” said Richard Tobin, president of Dover Corp., a Downers Grove, Illinois-based maker of industrial equipment and components, at an investor conference this month. “What’s happened over the last six months is probably making reshoring a real, real thing.”

But shortening supply chains takes years and massive investments. Minimizing threats like disease outbreaks or natural disasters is the more likely path than eliminating them. “De-risking is the name of the game at the moment, but it’s also not that easy,” said Florian Neuhaus, a partner with McKinsey & Co. in Munich.

So as the supply lines of the global economy fail to keep up with demand, the Big Crunch seen in 2021 might be around as long as the virus throws economies off kilter. Here’s a look at how widely the ripple effects are being felt, based on the observations of Bloomberg reporters around the world:

At a Houston Ikea store in early September, some customers arrived before the doors opened at 10 a.m. and hustled to purchase a Sniglar crib, a popular item for expectant families and one that had long been out of stock at that location. A notice had gone out to customers that there were seven available. When the doors opened, one man saw another sprint by in the direction of the baby aisle, prompting a mini footrace. Within minutes, four were snatched up and a line had formed to grab the remaining three.

In Sydney, Australia’s most populous city, internet shopping and the delta outbreak have put huge strain on supplies over weeks of lockdown. That means more items than normal are out of stock and wait times for home delivery slots are longer. When their essentials do arrive, some shoppers have been surprised to find their groceries from supermarket giant Woolworths delivered not by the its fleet of trucks, but chauffeured from the store to their door by taxi, a masked cab driver ferrying their bags of milk, bread and other essentials to their front door.

On Aug. 21, a consumer in Singapore put in a routine Amazon.com order for items that would have to ship from the U.S. Typically these packages take about a week to arrive, and are sometimes consolidated into one package rather than scattered across boxes. While a few items arrived separately with only a slight delay, the order for a three-pack of Carhartt low-cut men’s socks finally arrived a month after the order -- four times the normal wait.

Prepare to Pay Up

Linen House, a Cape Town, South Africa-based linen wholesaler, has seen the flow of goods from suppliers in Asia being repeatedly delayed, causing it to miss delivery deadlines and wreaking havoc with its cash flow. Container rates have shot up by as much as fivefold because of the disruptions that the pandemic is causing at ports around the world. Space on containers has been hard to secure and at one point, the company had a shipment of finished goods delayed for six weeks trying to leave India, said Adrienne Sodar, the company’s joint managing director.

In Mexico, the production facility of the Icelandic medical supply company Össur struggled to get access to the ethylene-vinyl acetate needed to make prosthetic feet. Resin for plastic products had been scarce since last year, and they had scrambled to find alternative sources. A year ago, they were dipping into inventory, and had to cut back on their production of neck, knee and elbow braces. But it was the extended lack of ethylene-vinyl acetate that made them unable to meet prosthetic-foot demand this year. By September, according to Eduardo Salcedo, global operations director of Össur de Mexico, they were at 80-85% of their normal production capacity.

Near Frankfurt, a customer bought a Skoda Octavia family car in June, with a trailer-hitch-mounted bike rack the only missing feature. After promising to install one for 990 euros ($1,160), the dealer later called to say Skoda hitches were sold out but would arrive again in July. A few days later he called to say delivery had been delayed until November. The only option was installing equipment from a third-party supplier, but that product wasn’t compatible with Skoda software that drives safety features like sensors on the bumpers, and the technical tweaks needed aren’t possible for months. So another trailer hitch was installed -- but many of the car’s safety features remain disabled, possibly until Christmas.