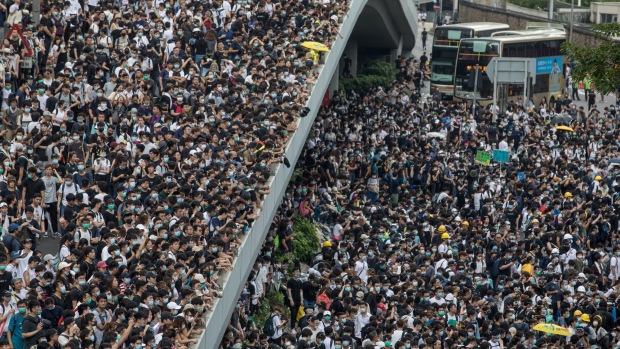 As Chinese leader Xi Jinping faced mounting headaches, from mass protests in Hong Kong to the U.S. trade war, tensions rose in the Persian Gulf after the U.S. accused Iran of being behind attacks on two oil tankers, and Conservatives in the U.K. began choosing a successor to Theresa May as prime minister.Read about those topics and more in this edition of Weekend Reads, and click here for some of Bloomberg’s most compelling political images from the past seven days.

Xi Assailed on all Fronts as Hong Kong Adds to Trump PressureFor most of the past six years, Xi Jinping has had free rein to define his presidency. No longer. With challenges piling up from the economic strains of the U.S. trade war to mass protests in Hong Kong, his tenure as China’s leader is increasingly being dictated by events. How Encrypted Messages, Car Crashes Helped Hong Kong ProtestersThe lessons of Hong Kong’s 2014 “Umbrella Movement,” when thousands of black-clad demonstrators braved tear gas and rain for 79 days, appear to have made the city’s protesters swifter and better prepared in some of their latest attempts to weather police action. Fion Li, Blake Schmidt, Shawna Kwan and Tracy Alloway explain. Why the Strait of Hormuz Is World’s Oil FlashpointAfter two apparent attacks on oil tankers in the Persian Gulf a month apart, traders are once again preoccupied with the Strait of Hormuz, the narrow sea conduit through which the Middle East’s crude flows to international markets. Grant Smith, Julian Lee and Javier Blas report on what’s at stake.   Saudis Get Used to Bars and Wonder If Booze Is Coming NextWomen sit on bar stools sipping blueberry mojitos in front of wall-to-wall screens, erupting in cheers when their soccer team scores. This being Saudi Arabia, of course, there’s one thing missing: alcohol. But as Vivian Nereim and Donna Abu-Nasr explain, Saudis are starting to wonder if another hallmark of their country’s strict interpretation of Islam might start to disappear.

His Critics Say He Lies, But Tories Want to Trust Boris JohnsonBritain’s Conservatives face a key question as they consider whether they really want Boris Johnson to become the next prime minister: Can they trust him? Robert Hutton and Tim Ross report.A Tiny Tyranny in Equatorial Guinea Sustained by Oil RichesState media in Equatorial Guinea once compared President Teodoro Obiang Nguema Mbasogo to God. But as Alonso Soto writes, during his 40-year rule of the oil-rich West African nation, a gulf has opened between a tiny elite and the masses of poor who must survive some of the worst social indicators in the world.Trump Deal Spells Danger at Border as Migrants Pile Up in MexicoMexico promised to ramp up immigration enforcement at a time when asylum seekers bound for the U.S. have already stretched detention centers and shelters on both sides of the border. Nacha Cattan explains that accepting more migrants in Mexico will exert increasing financial pressure on an economy already coping with slowing growth and pinched budgets.Caracas Is Suddenly Attracting a Migration Wave of Its OwnWhile Caracas has earned a reputation for hardship as Venezuela’s economic and political crisis has deepened, Daniel Cancel reports how the South American capital is seen as paradise by many from towns across the country in the grip of food shortages, power cuts and gasoline scarcities.

Kamala Harris Gambles on Embrace of Her Record as a ProsecutorDemocratic Senator Kamala Harris is increasingly embracing her record as a California prosecutor, seeking to reboot her presidential campaign by portraying herself as a gritty brawler who is uniquely qualified to take on Trump in 2020. Sahil Kapur reports. Trump's Rural Base Sticks With Him Despite Discontent on TradeMike Dorning explains that rural Americans are showing no signs they’re ready to abandon Trump even as dissatisfaction grows among farmers over his trade policies. And finally … The fading facades of century-old buildings in a neighborhood of the Nigerian megacity of Lagos house a vibrant technology cluster that’s caught the eye of Facebook and Google. Yaba’s path into the spotlight was driven by a grassroots movement that lobbied for support from a government not immediately sold on the economic benefits of technology. Then, last July Vice President Yemi Osinbajo took local start-ups to Silicon Valley. Google’s Fola Olatunji-David says part of Lagos’s attraction is that it has a “buoyant, characteristic ‘anything-can-happen’ feel.”

To contact the author of this story: Karl Maier in Abuja at kmaier2@bloomberg.net

To contact the editor responsible for this story: Kathleen Hunter at khunter9@bloomberg.net