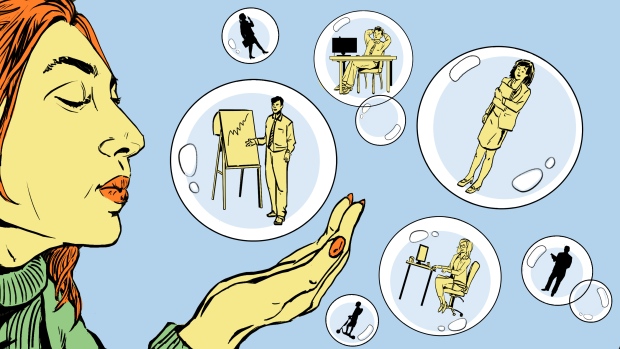 The COVID-19 pandemic has forced many employees and employers to abruptly adjust to a new workplace reality.

A key concern for employees is how to handle finances related to the workplace, including home office expenses, filing taxes, paid sick leave, and knowing what they can expect their employers to cover.

Experts weigh in on what employees should expect – and how they can keep track of their expenses – as their new way of work sets in.

Employees who are working from home for more than half their time should keep a record of home office expenses and be ready to explain how they are calculated, Jamie Golombek, managing director of tax and estate planning at CIBC Wealth Advisory Service, told BNN Bloomberg in an email.

These expenses can include electricity, heating, maintenance and rent, but not mortgage interest, property taxes, home insurance, or capital expenses or depreciation.

Employees who plan to claim expenses from their home office expenses should ask their employers to sign form T2200 before filing tax returns for 2020 next year, Tim Cestnick, co-founder and CEO of Our Family Office Inc., said in an email. He says the T2200 does not have to be filed along with taxes, but should be kept handy in case the CRA asks to see it.

However, Cestnick notes that claimants are only meant to deduct the portion of their expenses that related to their home offices.

“Most people find that their workspace in their home accounts for five per cent to 20 per cent of their home,” he said. “If you claim a significantly higher percentage than this, you might open your tax return to a review or audit.”

These are times to take some losses and recalibrate: Our Family Office

Tim Cestnick, co-founder and CEO of Our Family Office Inc, joins BNN Bloomberg to discuss planning for retirement amid COVID-19.

Office supplies that could be covered by employers

Some employees may be wondering which work-related office expenses their employers may cover during an extended period of working from home.

“The answer to this question really depends on your employer,” Cestnick said.

There’s no legal requirement for employers to subsidize home office equipment or supplies, although most employers will make sure workers can access company software, specialized programs or equipment, according to Christopher Pigott, a labour and employment lawyer and partner at Fasken.

Some employers may give employees a technology allowance or reimbursement for office technology such as computers, printers, headsets or webcams. Employers may also choose to cover phone expenses, writing utensils, printer paper or ink.

In April, the Canada Revenue Agency (CRA) announced a new $500 allowance on computing equipment that an employer is paying for. This means the CRA won’t require that employee to pay tax on up to $500 of what would typically be a taxable benefit, as long as a receipt is provided.

“If you are incurring additional costs because of working from home, speak to your employer to request reimbursement; many employers will help if they can,” Cestnick said.

As for employees who are still required to go into a physical workplace, their employers aren’t legally required to pay for masks or other personal protective equipment, unless the workplace is made up of front-line staff such as health-care workers, front desk workers or cashiers, according to Daniel Lublin, a founding partner at employment and labour law firm Whitten & Lublin.

On May 25, Prime Minister Justin Trudeau said his government would push leaders of provinces and territories to ensure that all workers in Canada will be able to access 10 days of paid sick leave each year.

From a human resources perspective, this development could be promising for workers.

“COVID-19 doesn’t care if they’re working from home. Illness is illness. If an employee gets sick, they deserve to have this benefit regardless if they work from home or at an office,” according to Bill Howatt, president and founder of Howatt HR Consulting.

However, there is not yet any legal requirement for employers to offer paid sick leave.

“The vast majority of Canadian workers are provincially regulated and, therefore, their entitlement to sick pay will depend on the law of the province or territory in which they work,” Fasken’s Pigott said in an email.

“Currently, sick leave provided in employment standards legislation throughout Canada is generally unpaid – with a notable exception being in the federal sector.”

As it stands, Pigott says employees who were not entitled to paid sick leave before the pandemic cannot expect to be paid for sick leave now.

“We are a long ways away from 10 days of paid sick leave,” he said.

But Lublin added employees who can’t access paid sick leave are not without options right now. He said those workers should make claims through the Canada Emergency Response Benefit (CERB) or EI programs. Workplace insurance could be another option.

Paid sick leave is part of a public policy debate where the core of the issue is who should pay for days that the employee is not working, according to Kevin Coon, labour lawyer and partner at Baker McKenzie.

“If the government wants there to be two weeks of paid sick leave for all employers then they have the tools to do it,” he said. For example, he says Ottawa could make changes to current EI rules or to the payroll tax scheme.

“If the feds put in place such a scheme, provinces would be hard-pressed not to legislate the protected leave from work.”

This is the third instalment in 'The Evolution of the Workplace,' BNN Bloomberg's weekly in-depth series looking at how workplaces in Canada are changing due to the COVID-19 pandemic.