Sweden’s capital has bred more tech unicorns per capita than any other region in the world save for Silicon Valley.

Spotify Technology SA and Minecraft maker Mojang AB put Sweden on the map for startups valued at more than US$1 billion and spawned a new generation of entrepreneurs. The Nordic country ranked first in Europe in cumulative capital invested per capita in the past five years, ahead of Ireland and the U.K., according to a tech industry report by venture capital firm Atomico.

The secret sauce includes technology and its intersection across a broad range of industries, from music streaming and gaming to how we pay for stuff and increasingly charge our cars. The dynamics are also evolving as early tech founders and backers allocate some of their vast wealth to the latest crop of startups.

Only this month, payments firm Trustly Group AB became the latest example in a long line of Swedish startups to see its valuation soar into unicorn territory. Its chief executive officer says it’s no coincidence so many are emerging on his home turf.

“There is some kind of climate here where Swedes are quick to test new services and products,” Oscar Berglund said in an interview. “It’s like there’s an ecosystem of funding and expertise.”

Examples include the venture capital fund Norrsken, Swedish for Northern Lights, launched by Niklas Adalberth, the co-founder of payments platform Klarna Bank AB that has been valued at US$31 billion; Niklas Zennstrom of Skype Inc. fame started Atomico in 2006 with a mission to invest in “Europe’s most ambitious tech founders;” and Spotify co-founder Martin Lorentzon is putting some of his US$6 billion fortune into investment vehicle Cervantes Capital AB.

“At 0.8 per 100,000 inhabitants, Stockholm currently has the highest number of tech unicorns per capita in the world except for Silicon Valley,” Sarah Guemouri, co-author of Atomico’s State of European Tech report, said in an interview, citing data for cities with more than one unicorn and 500,000 inhabitant.

“I see great opportunities to invest in Swedish small and medium-sized companies,” Lorentzon said in an interview. “Sweden has fantastic entrepreneurs and good corporate governance.”

Investors appear to agree, with the country already attracting 1.8 billion euros (US$2.2 billion) in venture capital so far this year, compared with 2.9 billion euros for the whole of 2020, according to researcher Dealroom.co.

Sweden has a long history of investing going back to the Wallenberg and Stenbeck families, who together still control much of the country’s stock market. More recently, Wallenberg-backed EQT AB has grown into one of the biggest private equity firms in Europe.

As a share of GDP, the amount of private equity capital, including venture capital, raised in Sweden is second only to Luxembourg in the European Union, consultancy Copenhagen Economics said. Private equity investment has boosted the Swedish economy by 4.7 per cent since 2007, it added.

The fundraising is particularly evident in the country’s fintech sector, where the policy agency Tillväxtanalys estimates there are as many as 450 active companies. The agency’s Eva Alfredsson, who recently authored a report on the industry, points to several reasons international fintechs such as Klarna and Trustly have made Sweden their home. 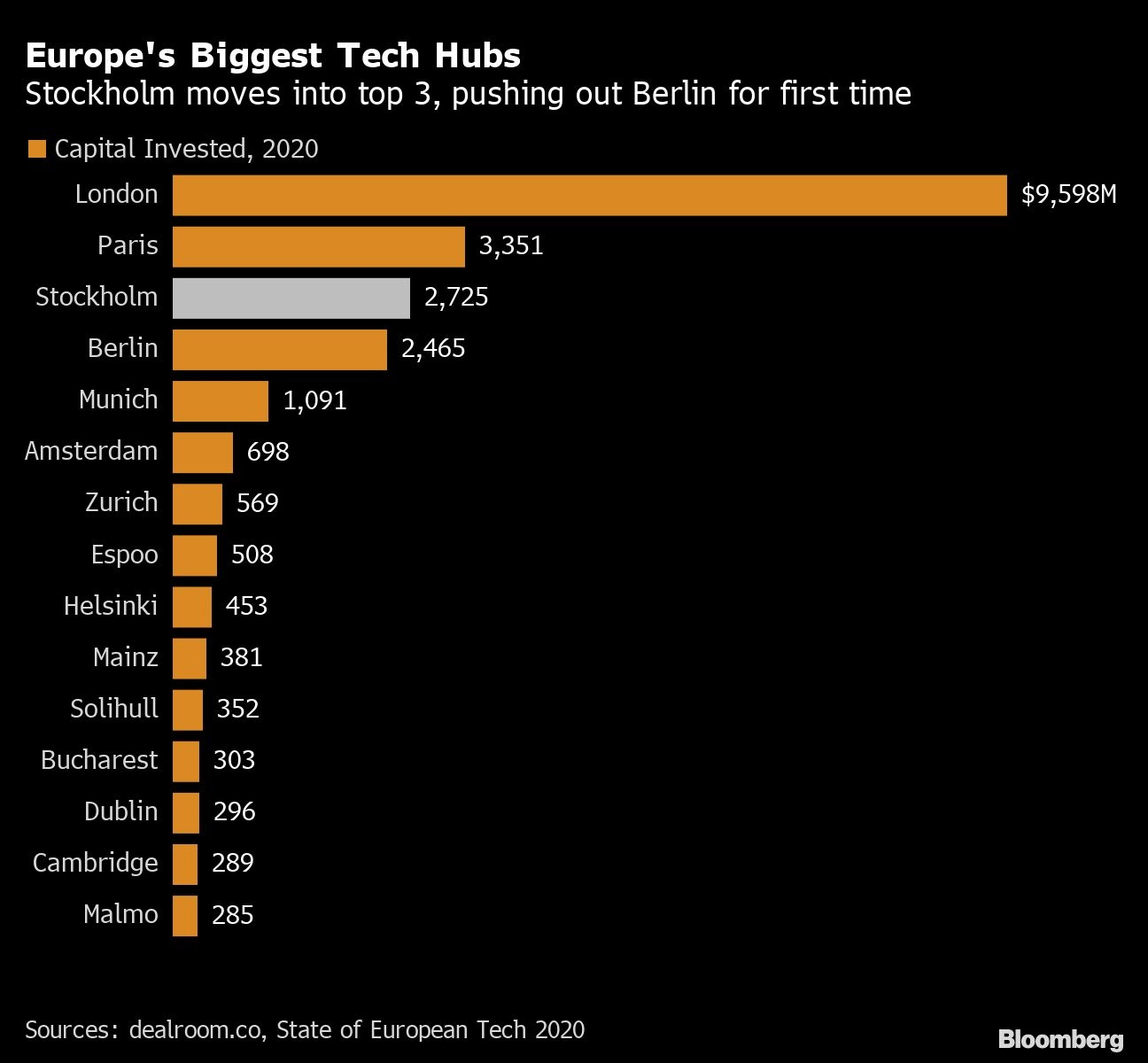 “Sweden is one of the most innovative countries in the world and a country in which it’s easy to start and run companies,” Alfredsson said in an interview. She added the nation was “early to digitalize,” citing a government-subsidized program for home computers in the 1990s that “spread IT-competence to the whole population.”

As one of the world’s most cashless societies, combined with its tech-savvy population, Sweden has provided a platform for fintechs and new payment methods to flourish, according to Swedish Financial Technology Association Secretary General Louise Grabo.

“New regulations such as the Payments Services Directive have opened up the financial sector for more innovation and competition,” Grabo said.

Technological factors are driving successes in other parts of the economy too. For example, vegan drink-maker Oatly AB is considering a US$10 billion valuation in a U.S. initial public offering, people familiar with the matter said last month.

“The business investment scene in Sweden has become much more interesting than maybe 10 years ago,” said David Sonnek, the CEO of Industrifonden and one of Oatly’s early-stage investors.

One of the best things about the region’s investment prospects is its people, according to early-stage investor Par-Jorgen Parson, who backed Spotify over a decade ago. “Employees are far ahead in digital development, compared to many other countries,” said Parson, whose Northzone holds Klarna and iZettle AB in its portfolio.

Sweden benefits from a “low cost of talent and loyalty to business goals rather than the self-serving, international mindset of most startups,” Parson said, adding that a lack of hierarchy and a good level of education “means that you will come a long way with limited capital.”

The education system also reflects the country’s international outlook, according to Bo Becker, the Cevian Capital Professor of Finance at the Stockholm School of Economics.

Despite a Social Democrat-led government and continued support for a welfare state, the system “is built to work for large companies,” Becker said, citing education, favorable regulations and the tax system.

Startups that thrived have also spurred on others. There’s “a vibrant ecosystem of successful entrepreneurs, executives, and investors who have been part of generational companies, such as Spotify,” said Cameron McLain, who co-founded and runs Giant Ventures in London. “These successes produce role models, experienced talent, and capital which then generates further successes, and the flywheel continues.”

For Trustly’s CEO, who plans to raise almost US$1 billion through an IPO in Stockholm soon, all of these factors add up to “some kind of cross-fertilization.”

“It has been an important part of our journey that we have grown up in Sweden, absolutely.”