Tesla Inc., Netflix Inc., Nvidia Corp. and Facebook-owner Meta Platforms Inc. have all lost over 10 per cent in the past few weeks. That wiped several hundreds of billions from their market values, with Meta alone losing some US$224 billion since its shares hit a September record.

The selloff gained force Friday, leaving the so-called NYSE FANG+ Index of the tech-industry’s giants bordering on correction territory, or a 10 per cent drop from the peak. That’s not seen as a good sign heading into the end of the year, the most illiquid trading season.

These so-called momentum stocks, including Nvidia and high-flying software names, were among Wall Street’s top performers in 2021, with their high levels of growth spurring a frenzy of buying.

But that’s now sharply reversing, with the hawskish signals from the Federal Reserve leaving investors bracing for rising interest rates that will affect some of the most highly valued stocks the most. Adobe Inc.’s 8.2 per cent drop on Friday and Salesforce.com Inc.’s nearly 12 per cent decline Wednesday among this week’s notable moves.

“This has driven a ‘stealth correction’ in U.S. equities, of those stocks with the highest valuations, growth expectations, and need for equity-market funding,” said Ben Laidler, global markets strategist at eToro. 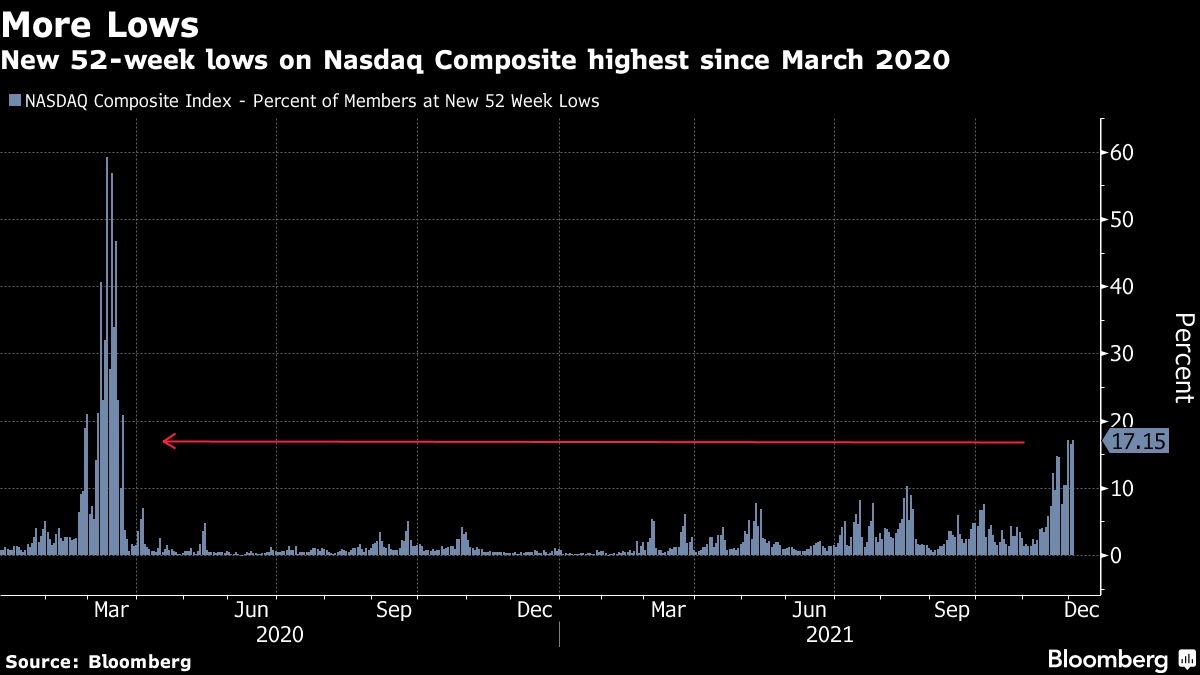 The weekly fund flow statistics from Bank of America Corp. also showed investors were rushing to the ultimate safe-havens like cash and U.S. Treasuries.

Institutional money is also pulling back, said Steen Jakobsen, chief investment officer at Saxo Bank. He said “the Fed pivot to inflation” has led to this rout and that taking profit at this point makes sense because markets would remain illiquid during the Christmas season.

Tesla tumbled 6.4 per cent Friday, while Nvidia fell 4.5 per cent, both of which weighed heavily on the S&P 500 and Nasdaq 100 Index. Moves in shares of companies that make no profits has even been worse: Rivian Automotive Inc. is around 40 per cent off its all-time highs. The Nasdaq Biotechnology Index tumbled to the lowest since last year on Friday and is on track to end 2021 lower.

With valuations still sky-high, the rout is likely to be far from over. Some traders see a parallel to 2018’s year-end market crash, when the Nasdaq 100 tumbled 17 per cent in the fourth quarter.