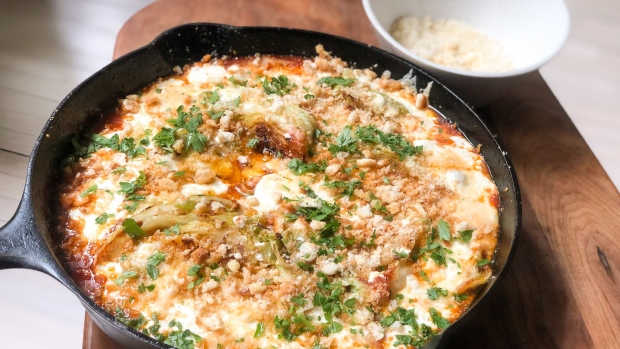 Who owns a recipe? That question is a serious, long-time issue in the professional food world, where recipes can be reprinted verbatim without credit. (That your grandmother’s holiday casserole is direct from the back of a can is another issue entirely.) Nathan Myhrvold, the former chief technology officer at Microsoft Corp. and author, most recently, of Modernist Pizza, believes that singular recipes could be copyrighted, like computer code.

But when it comes to distinctive recipes, there’s nothing quite like cabbage parm. It’s a dish that seems custom made for this time of year, when  a cauldron of bubbling red sauce signals coziness and comfort. It also represents outside-the-box thinking in the chicken-and-eggplant parm zone, and works for a variety of diets, from vegetarian to keto.

Recipes include their version of classics, such as mortadella spiedini and farfalle with white vodka sauce. An entire chapter is devoted to meatballs. Several of the book’s 125 recipes are from the Don Angie menu, including their bestselling pinwheel lasagna. The majority are not. “We set out to write less of a restaurant cookbook and more something people could actually use in their homes that is our idea of Italian American cuisine,” says Rito.

Tacinelli, renowned in many circles for creating the chicken parm pizza with Rito at Quality Italian restaurant, lays claim to inventing the cabbage rendition for home cooks. “I was thinking of how good eggplant parm is, and I wanted to do a cabbage recipe. So the next thought is, ‘Can I do a recipe for cabbage parm?’” he says. There was only one way to find out: “We put it all together and it worked.”

Key to the dish, which owes a lot to stuffed cabbage, is the very significant amount of butter that goes into making it: two sticks. (Not a typo.) That butter does double duty, first by braising and flavoring the cabbage as it browns (because who wants a dry wedge of cabbage, even if it’s one topped with tomato sauce and cheese?). Then, when the wedges are caramelized, the melted butter gets stirred into the tomato sauce to amp up its parm bona fides.

The dish has the taste of a favorite family recipe. Browning the cabbage in the butter gives it a nutty flavor that’s delicious in itself. A purist might not call it a parm (no one is breading any cabbage leaves here), but the flavors and textures are right there, thanks to the rich tomato sauce based on a Marcella Hazan recipe, plus molten cheese topping, garlicky bread crumb, and of course Parmesan cheese. It eats lighter than a platter of chicken or veal parm, butter notwithstanding. “It’s different than the classic, but you still get that red sauce feeling,” says Tacinelli.

The following recipe is adapted from Italian American, by Angie Rito and Scott Tacinelli, with Jamie Feldmar.

Tester’s note: This dish is rich enough for a main course; a bowl of pasta, served alongside, will soak up the tasty sauce. In the book, Rito and Tacinelli offer a 10-minute tomato sauce recipe, but your favorite store-bought marinara will suit well.

Heat a large cast-iron or heavy-bottomed ovenproof skillet over medium heat. Place 4 cabbage wedges and 1 stick of butter in the skillet. As the butter melts, add 1/2 teaspoon of the salt. Cook the cabbage for about 10 minutes, until dark golden brown on the bottom and the butter is browned; baste the cabbage frequently with the melted butter to flavor it.

Carefully transfer the cabbage to a large plate, with any leaves that have fallen off. Pour the butter into a large bowl.

Wipe out the skillet and repeat the browning process with the remaining cabbage, butter, and salt, transferring the browned cabbage to the plate and pouring the excess butter into the bowl. Set aside 1 tablespoon of the browned butter in a small saucepan.

Add the tomato sauce to the bowl with the butter, and whisk until combined. Pour the sauce around the cabbage, and top with the mozzarella and ½ cup of the Parmesan.

Roast until the cheese is melted, the sauce is bubbling and the cabbage is just tender, 5-10 minutes. Remove from the oven and let sit for a few minutes.

While the cabbage is baking, sauté the chopped garlic in the reserved 1 tablespoon butter in the small saucepan, just until fragrant and softened, about 1 minute. Mix the garlic butter into the bread crumbs.

Top the cabbage parm with the bread crumbs, a drizzle of olive oil, and the parsley. Serve with the remaining Parmesan.

Note: To make coarse bread crumbs, crush store-bought croutons with a rolling pin or the bottom of a heavy skillet; they shouldn’t be too fine.