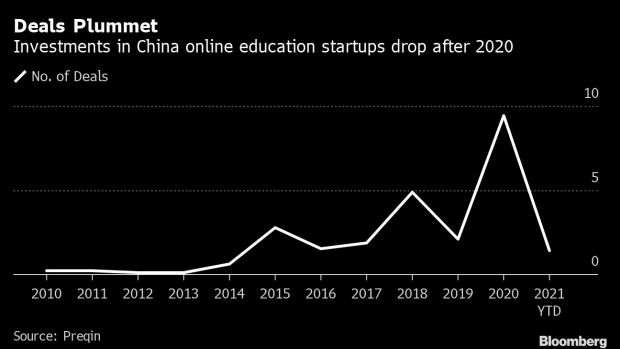 (Bloomberg) -- Global investors from Tiger Global Management to Temasek Holdings Pte are reeling as China prepares to impose its harshest curbs yet on its $100 billion private tutoring and online education sector.

China is considering asking companies that offer tutoring on the school curriculum to go non-profit, people familiar told Bloomberg News, potentially wiping out a big chunk of the billions that private equity and venture capital funds have staked on a once red-hot sector.

In rules currently under debate, the platforms may lose their ability to raise capital or go public -- depriving their backers of the exits they need to cash out. And foreign capital could be banned from the sector, with uncertain ramifications for the likes of Singapore’s Temasek and GIC Pte as well as Warburg Pincus and SoftBank’s Vision Fund that have all invested in many of the industry’s big players.

Changes to envisioned regulations may still occur as the rules haven’t been published. But the nationwide crackdown stems from a deeper backlash against the industry, as excessive tutoring torments youths and burdens parents with expensive fees. Once regarded as a sure-fire way for aspiring children (and parents) to get ahead, it’s now also viewed as an impediment to one of Xi Jinping’s top priorities: boosting a declining birth rate.

Investors risk having to mark down their portfolio drastically or worse, getting battered in a selloff. On Friday, some of the industry’s biggest names, including New Oriental Education & Technology Group Inc., TAL Education Group, Gaotu Techedu Inc. and Koolearn Technology Holding Ltd. tumbled after details of the impending clampdown surfaced.

It’s a stunning reversal of fortune for an industry that once boasted some of the fastest growth rates in the country. The online education sector had been expected to generate 491 billion yuan ($76 billion) in revenue by 2024. Those lofty expectations made stock market darlings of TAL and Gaotu, and groomed a generation of giant startups like Yuanfudao and Zuoyebang.

The current regulatory assault mirrors a broader campaign that began late 2020 against the growing heft of Chinese internet companies from Didi Global Inc. to Alibaba Group Holding Ltd. Investors betting on tech names beyond edtech have incurred hundreds of billions of dollars in losses since the start of the year, hammered by a series of regulatory crackdowns that expanded from fintech to encompass ride-hailing, grocery buying and food delivery.

Beijing’s desire to assert control over the economy and one of its most valuable resources lies at the heart of those actions. Companies that operate as internet platforms have come increasingly under scrutiny because of the reams of data they collect, stirring government concern over issues of privacy and security.

The potential losses in the education sphere alone could be staggering.

Alibaba, Tencent Holdings Ltd. and ByteDance Ltd. are among investors that have entered the education arena. Online education platforms attracted about 103 billion yuan of capital in 2020 alone, according to iResearch. The five biggest companies accounted for 80% of the funding raised.

Among privately backed startups, Yuanfudao is one of the largest with a valuation of $17 billion, according to iResearch. Rival Zuoyebang fetched a $3 billion valuation in 2018. And Huohua Siwei was valued at $1.5 billion this year, according to a local media report. Collectively, the three have raised $7 billion from investors, according to Crunchbase.

The regulatory clampdown has thrown a wrench into the IPO plans of many high-flying startups, dragging down valuations for those that forged ahead with a listing. Zhangmen Education Inc. has plunged nearly 50% of early Friday in New York since it listed.

It’s ultimately unclear how the government clampdown will turn out -- many believe Beijing won’t seek to annihilate an industry that still plays an essential role in grooming its future workforce. For now, many investors may choose to err on the side of caution.

“But we are looking for opportunities to re-build positions,” he added.