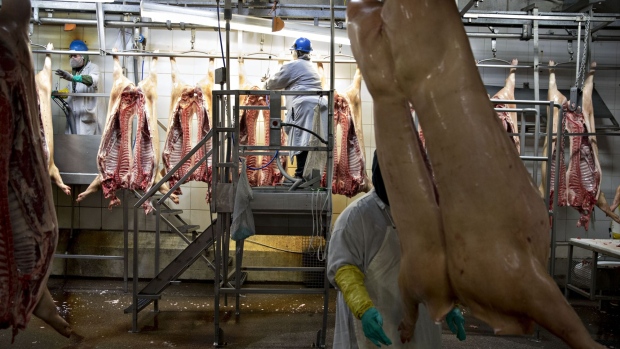 For weeks, Gloria Carrera wrestled with a question millions of food workers face: Should she go to work and risk getting infected, or stay home and risk going broke?

“Both decisions feel the same -- and feel hard,” said the 43-year-old tomato picker in Florida. In the end, she decided she needs the paycheck too much to sit out the pandemic.

By now, the COVID-19 outbreaks pulsing through the U.S. meatpacking industry have been widely reported, but across continents and product lines, similar stories are playing out on a smaller scale. In South Africa, a bread factory shut after 12 staffers tested positive. In Holland, five Kraft Heinz Co. plant workers reportedly caught the bug. In Brazil, coffee growers worry they can’t keep their employees safe and, in Honduras, a fruit export giant has been accused of downplaying the risks.

The flareups highlight how a combination of close working quarters and unforgiving attendance policies can turn the front lines of the global food supply chain into the perfect breeding ground for the coronavirus. Food workers, poorly paid yet essential, often feel they have no choice but to keep clocking in.

“Meat plant workers are not soldiers called to sacrifice health and life for the benefit of all,” said Lincoln Cordeiro, a labor prosecutor in Brazil investigating reports of outbreaks at some slaughterhouses.

In the U.S., where harvests are already underway but will peak as the weather gets warmer, advocates worry that farmhands who work and sleep in groups are particularly susceptible. There are about 2.5 million to 3 million workers on farms of all sizes, with about three-quarters estimated to be foreign born.

In East Wenatchee, Washington, Stemilt Growers tested 71 orchard workers, who were housed in the same complex, after some co-workers started feeling sick. Thirty-six tested positive, although they showed no symptoms, according to the company.

“It makes you wonder about the prevalence of the virus in the essential workforce,” said Erik Nicholson, vice president for the United Farm Workers union. Stemilt acted responsibly in testing workers at the first sign of trouble, but throughout the industry, there’s a “woeful lack of testing,” he said.

Growers from Brazil to the U.S. and Europe say they are taking the measures they can. Advocates say they aren’t enough.

Businesses have touted improved communication with employees, newly installed hand-washing stations in fields, and social distancing measures to the extent possible. Personal protective equipment like masks and gloves are being supplied to workers when available, they say. Other growers are separating crews into teams so if one member gets sick, it won’t take out the entire workforce.

“You hope the measures you’re taking will protect you,” says Charles Hall, executive director of the Georgia Fruit & Vegetable Growers Association. Still, he concedes, it’s not a perfect system. “On a farm, it’s hard to be 100 per cent at six feet apart.”

Bruce Goldstein at Farmworker Justice and Edgar Franks of Familias Unidas por la Justicia say their members haven’t seen many of the steps implemented. Instead, they say, the facts aren’t reaching workers and, in some cases, misinformation is. Some employers have told farmhands the pandemic doesn’t exist or that it’s fake news, the Washington D.C.-based Centro de los Derechos del Migrante told reporters earlier this month.

“We’re living and working as if everything were normal,” said Maria Cisneros, who picks fruit at an orchard in Washington state. She said no gloves, masks or disinfectant have been offered to workers, who still gather tightly for meetings. Some use bleach or soap and water to try to disinfect things on their own, while others avoid bathrooms for fear of getting infected. “We’re really, really scared.”

In Honduras, a manager at the fruit export company Fyffes told workers that locals “are protected because we’ve eaten dirt since we were young,” according to two employees and the non-profit watchdog group International Labor Rights Forum.

Fyffes corporate affairs director Caoimhe Buckley said in an email, “We firmly refute the allegations.” The Dublin-based company hired additional medical staff, provided masks and hand sanitizer, and instituted temperature testing and social distancing, she said. “We are putting the health and safety of our employees first.”

Both growers and advocate groups agree that housing makes farmworkers particularly vulnerable, with Driscoll’s of the Americas President Soren Bjorn calling it the “single biggest risk.”

In produce-growing regions of California, for example, workers often live in densely populated communities, where the virus could take hold quickly and spread to various food-growing operations, Bjorn said. For migrant workers on H-2A visas, housing is employer provided and can vary from dormitory-style, with bunk beds and as many as eight people in a room, to barracks housing as many as 40 people.

In Brazil, labor inspectors on Friday ordered JBS SA to close a chicken plant, with about 48 cases detected among employees, according to a prosecutor. Three facilities owned by BRF SA registered 28 cases. COVID-19 has also swept through Canada’s meatpacking industry.

“Because these giant multinational corporations didn’t make the investment to protect workers, their plants are being forced to close,” said David Michaels, a George Washington University public health professor who ran the Occupational Safety and Health Administration under President Barack Obama.

Carrera, the tomato picker in Immokalee, Florida, said it’s hard to imagine how her job could get done without staff working close together. Employees are “basically face-to-face, with a tomato plant in between,” said the Mexico native, who wears a bandanna over her face while working.

After staying away from the fields for a few weeks, she’s now trying to find new work as her company’s operations wind down for the season. While she’d like to stay home out of fear of catching the coronavirus, she can’t afford to. Carrera lives in a trailer with her partner, two kids and another family, splitting the US$350 per week rent.

“That fear is still very present,” she said. “But we have to find work wherever we can.”