We're going to be ready to recover on the other side of COVID-19: Air Canada CEO

It’s a difficult time to be running an airline anywhere. For Michael Rousseau, the incoming chief executive officer of Air Canada, the job comes with a unique set of complications.

Air travel in Canada hasn’t even begun to bounce back from the COVID-19 crisis. Passenger traffic at airport checkpoints in January was just 13 per cent of last year’s levels, versus 38 per cent in the U.S., according to data from the countries’ transportation authorities. The situation for airlines is getting worse, even though virus cases are dropping.

A rebound is nowhere in sight. The government of Justin Trudeau, which barred most foreign travelers from entering the country last March, just made the rules even tougher. It’s also explicitly telling Canadians not to leave. In the first week of February, air travel was less than 9 per cent of year-earlier levels. The government has offered no dedicated aid package for airlines.

The result has been deep cuts across the industry. Air Canada has furloughed or dismissed more than 20,000 workers and used loans, equity offerings and aircraft sale-leaseback deals to raise billions of dollars.

The challenge for Rousseau, who starts in the top job Monday after more than 13 years as chief financial officer, will be to balance cash-preservation with the ability to meet rising demand once travel restrictions are relaxed, said Dan Fong, an analyst at Veritas Investment Research Corp.

“They’ve been very effective in the past at scaling up and scaling down,” he said. “The key, though, will be beyond the pandemic, because if you cut too deeply you’ll have a tougher time participating in the recovery.”

Hopes raised by the arrival of vaccines late last year have been dashed by the discovery of more-infectious strains, which prompted countries to tighten borders. The slow pace of vaccination is another impediment, pushing prospects for a global travel recovery to 2022. In its worst-case scenario, the International Air Transport Association now sees passenger traffic improving by only 13 per cent in 2021 compared with 2020, when it fell by almost two-thirds from 2019 levels.

Rousseau is following a tough act. Under departing CEO Calin Rovinescu, a lawyer who spent almost 12 years in the job, Air Canada expanded its network, adding direct international flights on routes with little or no competition, according to Fong. Labor relations improved, giving the airline operating flexibility, he said.

By preventing a trip to bankruptcy court in 2009, Rovinescu also set the stage for huge gains for investors. In the decade that ended Dec. 31, 2019, Air Canada shares gained 3,575 per cent, making it the top-performing stock in the S&P/TSX Composite Index. They collapsed during the pandemic but have more than doubled from a March low. 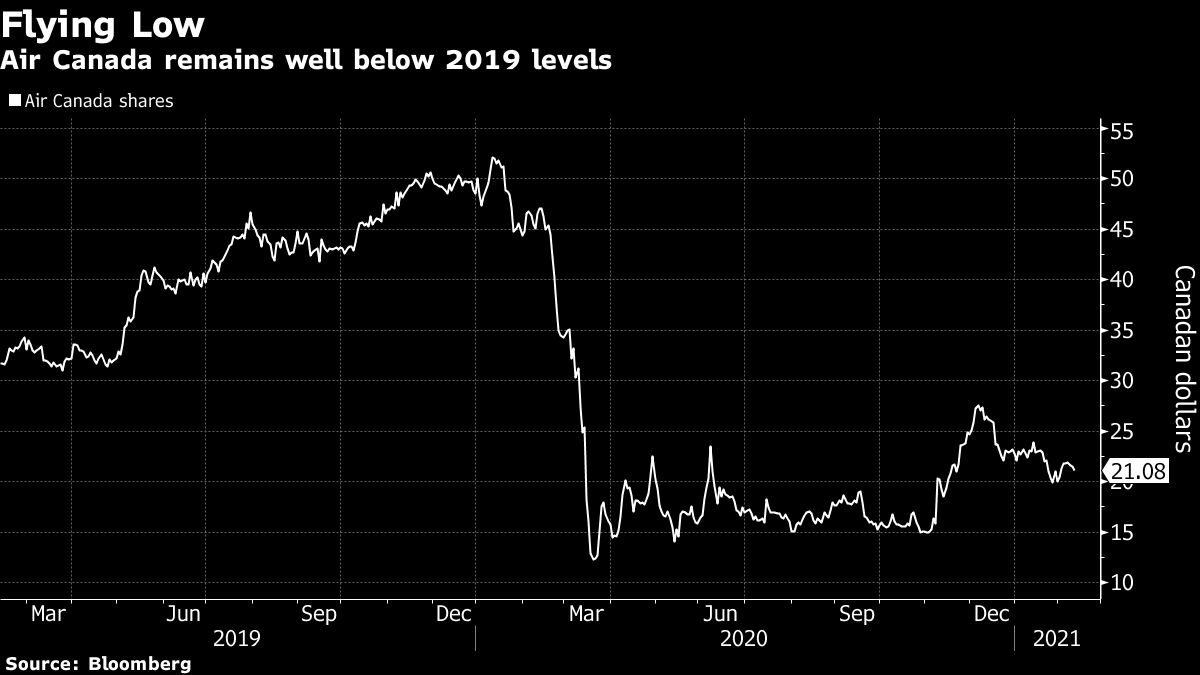 “They’ve not been supported by the Canadian government to date very much, so the way they’ve knocked down their cash burn is by letting go a bunch of people, cutting a bunch of stations,” Ferguson said. “Canada at some point needs to figure out what they want from their most important airline.”

Making things worse is Canada’s slow vaccine rollout, which could hurt reservations for the peak summer season. The country has administered just 3.1 doses per 100 people, versus 14 per 100 in the U.S., according to the Bloomberg Vaccine Tracker.

Analysts expect an 80 per cent decline in revenue when Air Canada reports fourth-quarter earnings on Friday. A key metric to watch is how much cash the company anticipates it will burn, after an expected $12 million to $14 million a day in the fourth quarter.

Air Canada has built up enough liquidity to hunker down for several more quarters. National Bank Financial analyst Cameron Doerksen estimates that the airline ended 2020 with about $8.2 billion in cash and will hit a low of $4.1 billion in the first quarter of 2022.

That kind of cushion helped Air Canada stay away from an emergency loan program for large businesses, which comes at a high cost and has been tapped by only one small airline so far. Air Canada has received some help from Ottawa in the form of a federal wage subsidy program, which helped reduce operating expenses by a net $391 million for the first nine months of 2020, filings show.

Trudeau and his ministers have pledged to support the airline industry, but additional funding will probably come with conditions.

The government’s priorities are to ensure airlines give refunds for canceled flights, reinstate suspended regional routes in Canada and protect jobs, Katherine Cuplinskas, a spokeswoman for Finance Minister Chrystia Freeland, said by email.

The government is right to not “mindlessly bail out” the industry, said Ambarish Chandra, a professor of economic analysis and policy at the University of Toronto’s Rotman School of Management. It could also take an equity stake, like Germany and other nations did with some of their airlines, he said. Rovinescu has said he opposes such aid.

“Air Canada has deep pockets, very profitable routes, it has a very strong brand name,” Chandra said. “If they really want a bailout, they should give the government something in return.”