It’s a racetrack adage that nobody has ever bet enough on a winning horse. In the options market, they keep trying.

Flush with winnings in stocks like GameStop Corp. and Tesla Inc., the smallest options traders, those who buy or sell 10 or fewer contracts at a time, have piled into record bullish bets in the last three weeks, adding nearly 60 million call options, according to data compiled by Sundial Capital Research. That’s 20 per cent above the volume late summer, itself a period of unprecedented exuberance.

Whipped up by chat-room chatter and riding a hot streak for the ages, newbie day-traders show no signs of reining in their bullishness. It’s a showcase of influence that draws daily warnings from the old guard.

“When you have a one-way directional market and everybody wins, it’s kind of like when you go to Las Vegas for the first time. The house really wants you to win, so you think this is an easy game,” said Richard Steinberg, chief market strategist for Colony Group. “Then you learn it’s not that easy.” 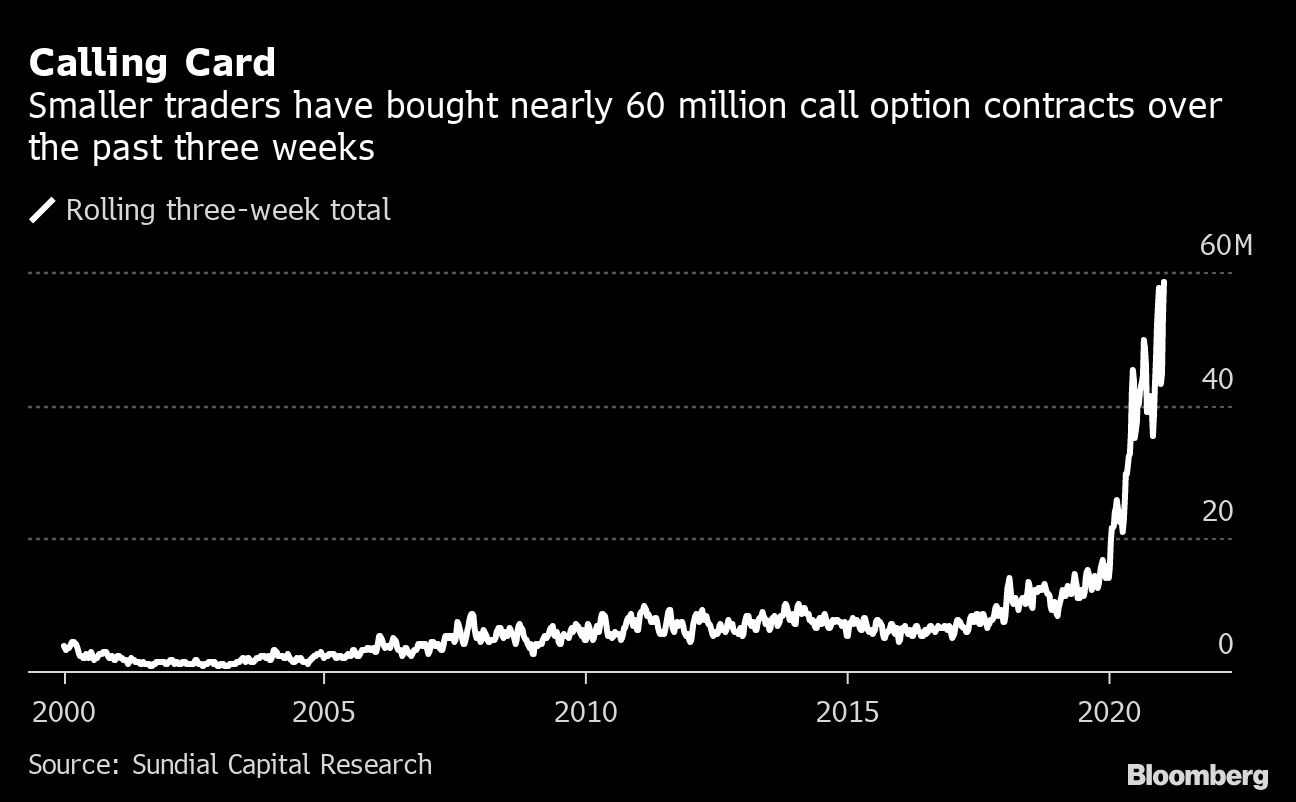 Whether it eventually gets harder, right now, it’s working. Consider GameStop, caught in a showdown between short sellers and an army of Reddit users. Shares of the brick-and-mortar video-game retailer soared as much as 145 per cent on Monday before retreating, adding to year-to-date gains of over 300 per cent.

Massive buying of bullish options helped fuel the rally. A record 1 million GameStop call options were purchased on Friday, followed by another 500,000 contracts on Monday. The scale of short-dated call buying helped power a bullish feedback loop of sorts, as the dealers selling the contracts then had to buy the underlying stock to bring their position back to neutral.

A similar so-called gamma squeeze was implicated in the run-up last summer, as market makers were forced to hedge positions. But an unwind can have the opposite effect, potentially exacerbating moves to the downside.

“It just kind of feeds on itself, and it creates this self-fulfilling buying pressures,” Jason Goepfert, president of Sundial, told Bloomberg Television on Monday. “But at some point, for whatever reason, it stops, and when it stops, all of those hedges have to be unwound, which means selling pressure.”

Even with the frenetic call buying, bears aren’t backing down. GameStop stock equal to 139 per cent of its available shares has been borrowed and sold short, according to data from financial analytics firm S3 Partners. Meanwhile, bearish bets outpaced bullish ones for two days, after six straight weeks of call volume clocking in higher than put buying.

GameStop’s not the only one to see heightened interest. Call buying in BlackBerry Ltd. and AMC Entertainment Holdings Inc. hit an all-time high on Monday, when overall U.S. trading with bullish option contracts topped 32 million. That was the second-most for any single day on record, data compiled by Bloomberg show. 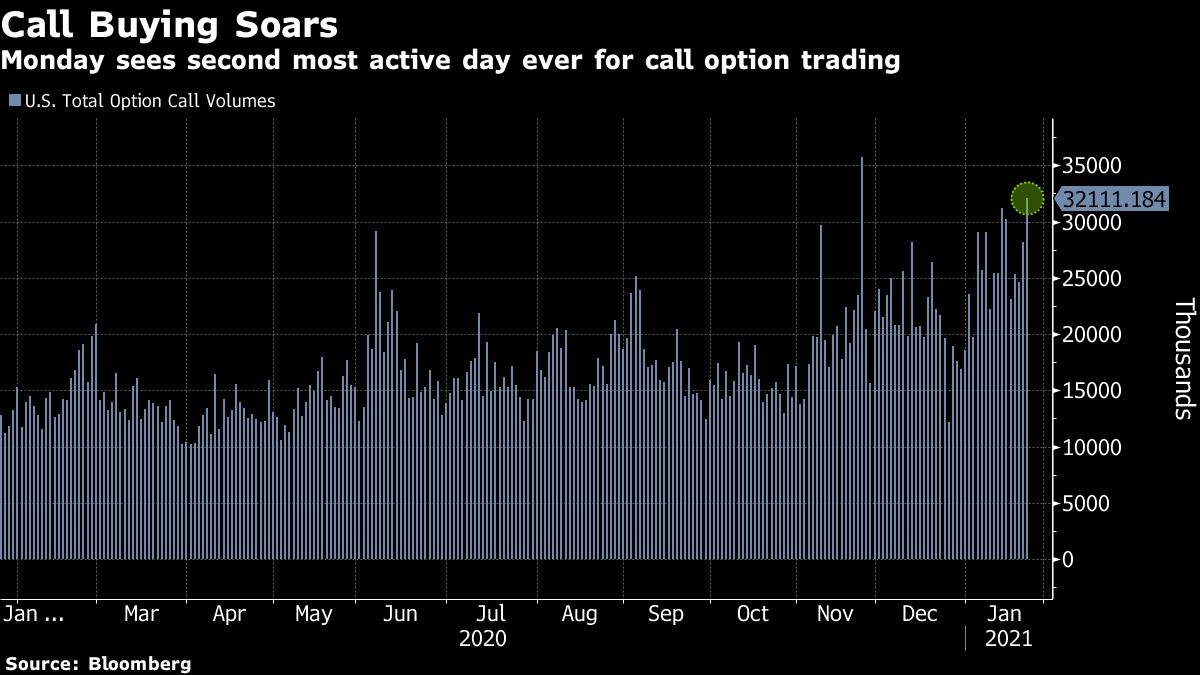 At the same time, interest in online forums -- where many such trading ideas have originated in recent weeks -- has grown too. One example is the website WallStreetBets, which now boasts over 2.2 million members after nearly 200,000 joined over the weekend, according to Breakout Point, a data and analytics firm.

Traders on the WallStreetBets forum appear to be “weaponizing” gamma to drive heavily shorted shares such as GameStop higher, according to Charlie McElligott, a cross-asset strategist at Nomura Securities.

“These guys see their collective power and go on stop-hunts,” McElligott said. “They understand that their grabbing of short-dated, deep out-of-the-money call options in stocks packs a lot of convexity and dealer-hedging sensitivity to a move higher in the underlying stock.”