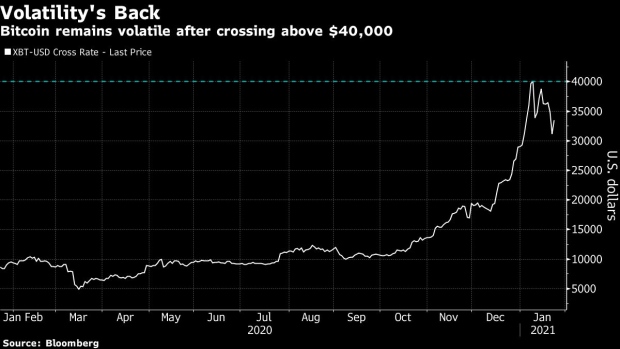 (Bloomberg) -- The IPO fever whipping up animal spirits in the stock market has spilled over into the crypto-sphere.

After watching investors pour millions into blank-check companies and seeing the likes of JFrog and Snowflake surge after market debuts, at least eight crypto firms are eyeing initial public offerings. Coinbase has filed. Other exchanges are laying out plans or looking to be acquired through special-acquisition vehicles. And two Bitcoin mining equipment firms in China are on IPO watch lists, according to Renaissance Capital.

While it’s somewhat surprising that an industry that prides itself on being an outsider to financial-market infrastructure has eyes for public listings, for some investors it is downright worrying. The IPO mania alone is enough to stoke bubble worries, but adding crypto to the mix after its record run is fueling concern that investors are setting themselves up for an especially painful comeuppance.

The IPO market has been red-hot since last fall as companies rushed to take advantage of the 70% surge in stocks since the March lows. Public debuts and blank-check companies have grown so popular that record after record fell. And first-day pops in share prices, a barometer of investor appetite for newly public firms, are among the biggest in decades.

It has all become too much to ignore for the crypto industry.

Coinbase and eToro, as well as MicroBT, a mining company, have spurred chatter of public offerings slated for this year, according to Renaissance, which provides IPO ETFs and institutional pre-IPO research. A handful of others -- Gemini Trust Co., a crypto exchange, and Bitmain Technologies and Bitfury, two firms centered around mining -- may also join the wave of new entrants.

Coinbase, which was valued at more than $8 billion in 2018, has ignited some of the biggest excitement. The company filed last month to go public in what many are arguing amounts to be a breakthrough moment for the industry. The exchange has about 35 million verified users and more than $25 billion in assets on its platform, Bloomberg reported. Coinbase declined to comment for this story.

Crypto enthusiasts have long sought a warmer embrace from Wall Street, wagering that greater mainstream acceptance could help usher in a period of growth. It’s a prognostication that was borne out in part last year, when institutional entrants helped push Bitcoin to new highs.

“It’s a pure-play bet on the fastest growing industry in the world, crypto, and we’re in the loosest money regime in history,” said Nic Carter, co-founder of researcher Coin Metrics. Carter added that he expects others to follow Coinbase.

To Mati Greenspan, founder of Quantum Economics, it’s a good environment for crypto firms to consider public debuts. Institutional adoption means there are “deep pockets” that are willing to invest, especially while crypto prices are skyrocketing.

“If you’re going to raise capital, it’s good to do it while the wind is in your sails,” he said. He doesn’t think it’s a frothy indicator.

The latest coin price rally is also partly why crypto miners are seeing high demand, according to Christopher Bendiksen, head of research at asset manager CoinShares.

“There’s a bottleneck in supply,” he said, adding that most mining equipment makers have all their expected inventory prepaid for six months in advance. “At this point I don’t think they are even taking a call.”

But many have questioned how much hotter crypto prices can get following a blockbuster 2020, when Bitcoin notched record after record. About 60% of returns since October can be explained by market exuberance and momentum trading, according to an analysis from Bloomberg Economics.

Bitcoin has come off its highs after it crossed $40,000 this month, but is still up about 16% this year. A survey of more than 620 market professionals by Deutsche Bank showed that 50% of respondents gave Bitcoin the maximum 10 out of 10 bubble rating. Whether it is will only be evident in hindsight. Investors with long memories, though, are taking note.

Matt Maley, chief market strategist at Miller Tabak + Co., says the wave of potential IPOs is something typically seen toward the end of a bullish run. While the trend might not be indicative of an imminent crash and he’s bullish on crypto, it’s still reminiscent of the type of exuberance seen at the height of the dotcom bubble in the early 2000s.

“When a bunch of companies in the same sector go public at the same time, it tells you that the people who run those companies realize that their valuations are very high,” and might be looking to capitalize on it, he said. “The smart guys are taking advantage of this parabolic move right now.”