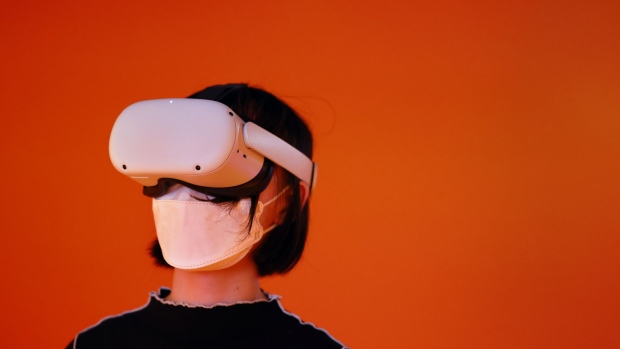 (Bloomberg) -- The US Federal Trade Commission pulled back in its first preemptive challenge to a takeover by Meta Platforms Inc., dropping some claims from a lawsuit that seeks to block the tech giant’s acquisition of virtual reality app Within Unlimited.

The agency, which sued to block the deal on antitrust grounds July 27, said it asked US District Judge Edward Davila Friday to let it remove some allegations about anticompetitive effects in the market for virtual-reality fitness apps.

Meta said the FTC’s case is “based on ideology, not evidence” and pointed out that the newly amended complaint drops allegations that its most popular virtual-reality game, Beat Saber, directly competes with Within’s Supernatural fitness app.

“The FTC now claims that Meta and Supernatural are not competitors, after previously claiming that they were,” Meta spokesperson Stephen Peters said in a statement. “What remains of the FTC’s case are speculative claims that continue to lack support in either the facts or the law.”

The company has denied the FTC’s allegations about the proposed deal and has accused the agency of selectively enforcing antitrust laws.

The FTC said in its original complaint that Meta’s acquisition of Within, which develops apps for VR devices, including Supernatural, would “tend to create a monopoly.”

In Meta’s Beat Saber game, users hit targets in time to music. The social network acquired the game when it bought Beat Games in 2019 for an undisclosed amount.  The game has since become Meta’s top grossing app in its Oculus Quest store, where VR headset users download apps, surpassing more than $100 million in revenue as of October 2021.

Within’s Supernatural is a subscription fitness service where users can work out or meditate to music in immersive environments. The FTC’s original complaint alleged the two apps competed directly for users, but the new version refers to Beat Saber as an “incidental fitness app” and argues Meta was likely to create its own dedicated fitness app to compete with Supernatural before the acquisition.

The challenge to Meta’s proposed acquisition is indicative of the FTC’s stepped-up enforcement agenda under Chair Lina Khan, who was named by the Biden administration. The antitrust agency has faced significant criticism from Congress and antitrust advocates for allowing the biggest tech companies to acquire startups that might grow into rivals.

Meta has made a number of acquisitions, most of them small, to bolster its offering in virtual and augmented reality. Chief Executive Officer Mark Zuckerberg believes that in the future, the company will popularize a metaverse -- a more immersive version of the internet, where people can populate an alternative virtual world to go shopping, go to work and see friends.

The change to the complaint comes weeks after a key Republican senator raised questions about whether the agency was making “contradictory legal theories” about Meta in the Within challenge and its separate monopolization suit against the social network.

At a Sept. 20 hearing, Utah Republican Senator Mike Lee told Khan he was concerned the inconsistency between the FTC’s arguments in the two cases could weaken the agency’s ability to challenge tech platforms. Khan declined to respond to Lee’s question about the Within suit, citing the ongoing proceedings.

The FTC is seeking an injunction to halt the Within deal in federal court, and has filed a separate complaint against the merger in its in-house court.

Davila has scheduled a two-week hearing in San Jose, California, on the injunction request and said he expects to issue a ruling before the end of the year, when Meta is trying to close the deal. The FTC’s in-house judge has scheduled a trial on the deal to start in January.

Stephen Calkins, an antitrust professor at Wayne State University Law School, described the FTC’s move to amend its complaint as “unusual,” particularly in a merger challenge, since those are often expedited.

“On a merger case, it’s not that common because it all happens fairly quickly,” said Calkins, who served as the FTC’s general counsel during the Clinton administration, adding that it is “certainly unusual to do it” within two months.

In a 2009 case, the FTC amended its complaint challenging the merger between organic grocer Whole Foods Market Inc. and Wild Oats Market Inc. But in that case, the FTC narrowed the allegations against the deal in its in-house court after initially losing in federal court, Calkins said, a different situation than in the Meta merger.

The FTC said the vote to file the amended complaint was 4-0 with Republican Commissioner Noah Phillips, who intends to step down from the agency this fall, recused. Republican Commissioner Christine Wilson -- who voted against the FTC’s original suit against Facebook in July -- said she voted in favor of amending the complaint, but still doesn’t support the case overall.