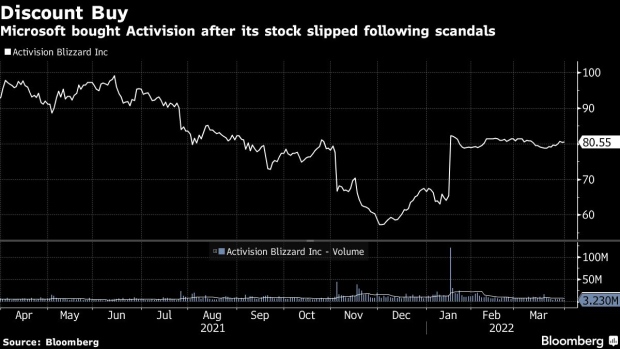 (Bloomberg) -- A group of Democratic senators including Elizabeth Warren warned that Microsoft Corp.’s takeover of Activision Blizzard Inc. could squelch workers’ calls for accountability after years of well-documented sexual harassment at the game giant.

The Federal Trade Commission, which is conducting an antitrust review of the deal, should consider whether Microsoft’s Activision acquisition could worsen the abuse and oppose the merger if they so determine, the senators wrote in a letter to FTC Chair Lina Khan.

“While Microsoft capitalized on lower stock prices from the sexual misconduct disclosures, they also signaled that they were willing to prioritize profits over entrenched issues of gender-based discrimination in the organization,” wrote the senators, including Sheldon Whitehouse of Rhode Island, Bernie Sanders of Vermont, and Cory Booker of New Jersey.

Activision has been shrouded in controversy since last July after a state agency filed a sexual bias lawsuit against the Santa Monica, California-based company, describing its “frat boy culture” and accusing its leadership of failing to take action. The U.S. Securities and Exchange Commission later launched an investigation into how the company handled the reports of misconduct.

Under terms of the deal, Activision’s embattled Chief Executive Officer Bobby Kotick would remain in his job until at least next year, with a $14.5 million payout if he’s forced to resign. While Microsoft has said it won’t interfere with a union drive at Activision, the statement amounts to “little more than lip service” in the absence of legal assurances, the senators wrote.

“If the FTC determines that the transaction is likely to enhance monopsony power and worsen the negotiating position between workers and the parties to this deal, we urge you to oppose it,” the Senators wrote.

The Wall Street Journal reported earlier on the letter.