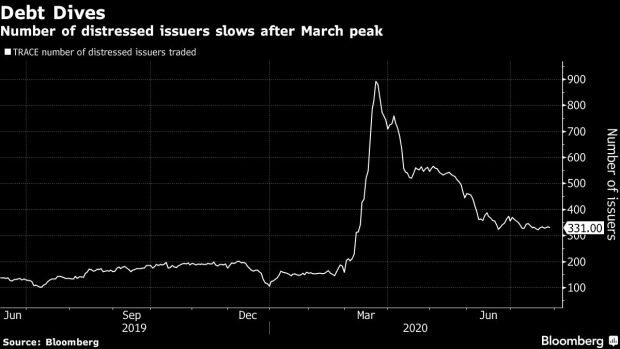 That segment of work is the strongest it’s been since the 2008 financial crisis, thanks to a surge in Covid-related bankruptcy filings, Michael Eisenband, co-head of FTI’s corporate finance and restructuring group, said in an interview. And with more companies expected to go under, the team is hiring more than ever.

“It’s just the tip of the iceberg,” Eisenband said. “There is trouble brewing.”

FTI’s corporate finance and restructuring segment posted a 29.5% jump in revenue to $246 million in the second quarter, compared with $190 million in the same period last year. But total revenue rose just 0.3%, hampered by less demand in the forensic and litigation practices as well as its technology business, according to a company statement.

To account for the increase in restructuring work, FTI continues to add to its corporate finance team, which has been the biggest contributor to revenue generation this year. It boosted its billable headcount for the practice by 34.7% during the second quarter, according to the release.

“My phone won’t stop ringing,” Eisenband said. The group has been hiring “opportunistically” through tapping internal resources and bringing in outside expertise when appropriate, he said.

The number of large Chapter 11 filings, meaning borrowers with over $50 million in liabilities, doubled in the first half of the year compared to 2019 levels, FTI said in a report this week. Most of that came in the second quarter, with 69 total bankruptcies making for the highest tally since the height of the global financial crisis.

While the restructuring business is active and growing for now, it’s too soon to tell how long the recession could last, Eisenband said. The Federal Reserve continues to pledge relentless support to corporate debt, and investors have been fairly accommodating in lending to desperate borrowers. That’s contributing to a drop in the amount of distressed debt outstanding.

“Credit markets will be more willing to finance the companies who are uniquely impacted by the virus,” that otherwise have good cash flow and operations, Eisenband said. “But those with fundamental issues and high leverage won’t have the same access.”