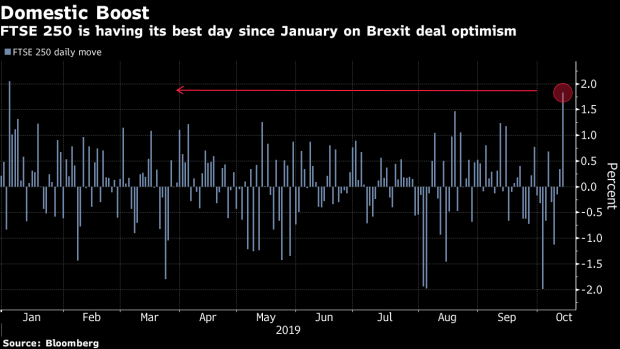 LONDON, ENGLAND - AUGUST 29: Financial market figures are shown on big screens and a ticker in the main entrance at London Stock Exchange on August 29, 2019 in London, England. The pound has come under renewed pressure after the government moved to prorogue parliament for five weeks, fueling fears of a no-deal Brexit. (Photo by Chris J Ratcliffe/Getty Images) , Photographer: Chris J Ratcliffe/Getty Images Europe

(Bloomberg) -- The U.K.’s gauge of mid-cap stocks raced toward its best day since January, boosted by a rally across companies exposed to the domestic economy on hope that the U.K. may reach a deal with the EU on Brexit.

The U.K.’s FTSE 250 Index surged as much as 2.2% after Irish Premier Leo Varadkar said Thursday that he believed an agreement is possible by the Oct. 31 deadline, following two-and-a-half hours of “constructive” talks with Prime Minister Boris Johnson. Ireland’s ISEQ All-Share Index jumped as much as 2.9%, also heading for its best day since January.

Among large cap stocks, Royal Bank of Scotland Group Plc and Lloyds Banking Group Plc, two of the U.K. banks with most exposure to the domestic economy, both surged more than 9% to have their best intraday gain in more than three years. Among decliners, big exporters GlaxoSmithKline Plc, British American Tobacco Plc and Diageo Plc all fell.

--With assistance from Joe Easton.

To contact the editors responsible for this story: Celeste Perri at cperri@bloomberg.net, Beth Mellor