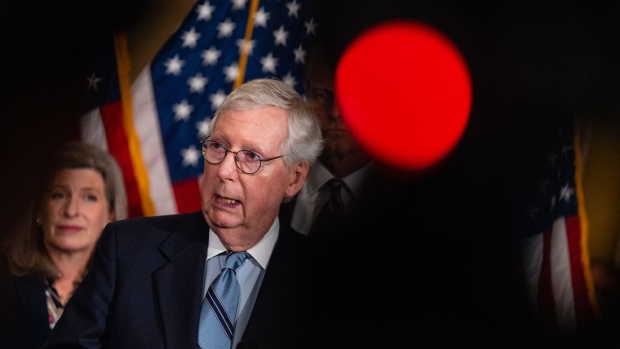 Sam Bankman-Fried, founder and chief executive officer of FTX Cryptocurrency Derivatives Exchange, during an interview on an episode of Bloomberg Wealth with David Rubenstein in New York, US, on Wednesday, Aug 17, 2022. Crypto exchange FTX US is expanding its no-fee stock trading service to all US users, including non-crypto investors, in a move to expand its customer base and increase assets under custody. , Bloomberg

(Bloomberg) -- FTX US, a part of Sam Bankman-Fried’s crypto empire that catered to American customers, contributed to a super-PAC fighting for control of the Senate in the midterm election just days before the company’s collapse.

The Senate Leadership Fund, which is aligned with Senate Republican Leader Mitch McConnell and was the top spender in the 2022 midterms, received the $1 million donation on Oct. 27, according to its most recent filing with the Federal Election Commission. Only a couple of weeks later, more than a 100 FTX-related companies, including the US arm, filed for bankruptcy, and Bankman-Fried resigned as head of the corporate group.

The contributor listed on the FEC donation report is West Realm Shires Services Inc. and FTX US is its commercial name.

The Senate Leadership Fund did not immediately respond to a request for comment. The super-PAC spent $239 million in the midterms on behalf of Republican candidates, according to OpenSecrets, which tracks money in politics.

While several members of Congress, including Illinois Senator Richard Durbin, a Democrat, and Republican Representative Kevin Hern of Oklahoma have said they would return donations from FTX executives or give the money to charities, there isn’t a requirement in election law for committees to return donations to companies that go bankrupt.

FTX US also gave $750,000 to the Congressional Leadership Fund and $150,000 to the American Patriots PAC, both of which supported House Republican candidates. It gave $100,000 to the Alabama Conservatives Fund, which backed Republican Katie Britt’s successful run for the state’s open Senate seat.

Individual executives at the broader FTX company have given far more money. Bankman-Fried emerged as major donor to Democratic candidates leading up to the Nov. 8 midterm elections, donating most of the $39.4 million that he gave to them, FEC records show. One of his top lieutenants, Ryan Salame, gave $23.6 million -- mostly to Republicans.

As Congress weighs bills that would regulate digital currencies, the crypto industry became a major player in the 2022 election cycle, with industry players donating $84.1 million through mid-October. But most of that amount, some 84%, came from Bankman-Fried and other FTX executives. Committees in the House and Senate have scheduled hearings next month on the firm’s collapse, with Bankman-Fried as a potential witness.

--With assistance from Allyson Versprille.