The spectacular collapse of 30-year-old Sam Bankman-Fried's crypto empire has fueled a spike in outflows across global crypto exchanges. Users yanked a net $3.7 billion worth of Bitcoin and $2.5 billion of Ether in the week from Sunday, Nov. 6 to Sunday, Nov. 13, according to data provider CryptoQuant.

They withdrew more than $2 billion worth of many of the largest stablecoins over the same timeframe, according to CryptoQuant, which tracks data from most major exchanges.

BNN BLOOMBERG POLL: What are you currently doing with your cryptocurrency position?https://t.co/XWyAGXuLN6

The past week has “undoubtedly been one of the darkest in the history of cryptocurrency,” said Sasha Ivanov, founder of blockchain platform Waves, in a statement. “It's disheartening to see the value of this fundamental technology diminished due to the collapse of what many felt was a leading exchange.” 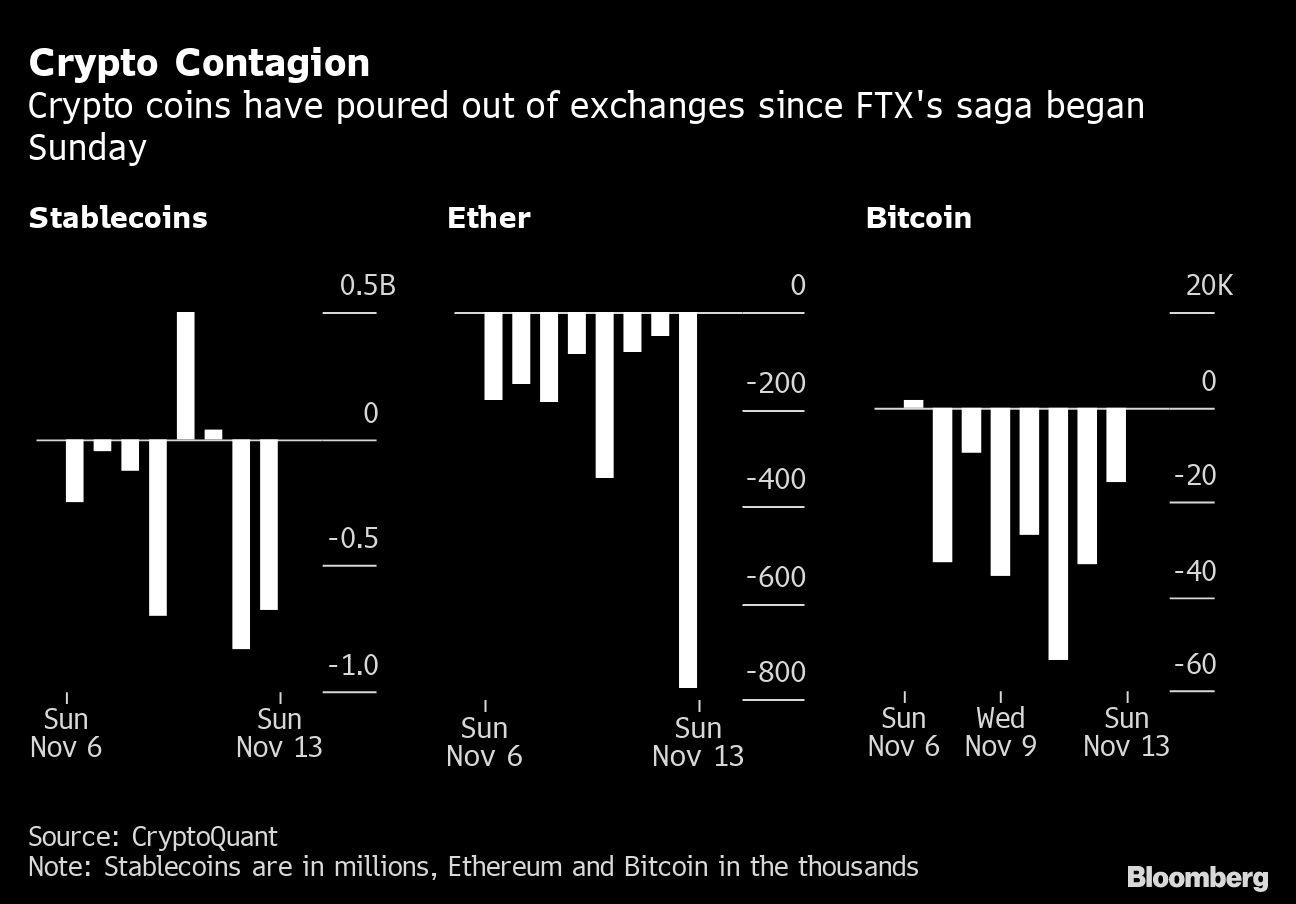 The fall of Bahamas-based FTX, which just recently was widely perceived as among the most dependable names in the sector, has sparked fresh concerns over the loosely-regulated nature of crypto companies and what guardrails are in place to safely oversee clients' assets. FTX is the latest in a long list of large crypto businesses to come undone this year, including hedge fund Three Arrows Capital, crypto lender Celsius Network and broker Voyager Digital.

The saga started on Sunday, Nov. 6 when a tweet from Binance's “CZ” cast doubt on the strength of Alameda Research, the trading firm affiliated with Bankman-Fried's exchange. The ensuing panic among FTX.com's investors became so intense that they collectively pulled $430 million worth of Bitcoin from the three-year-old exchange in just four days. The company had held more than 20,000 Bitcoin going into Nov. 6, CryptoQuant data shows. That sank to nearly zero by Wednesday, Nov. 9 as customers fled over worries about FTX's financial health.

Binance proposing a tentative takeover of the exchange and then backtracking on the offer during this time didn't help matters. On Thursday, Bankman-Fried tweeted that Alameda Research would be shuttered and by Friday, FTX Group had begun bankruptcy proceedings.

The leveling of another centralized crypto player in 2022 is emboldening calls for users to hold their own assets, rather than entrusting them to third-parties.

“This is the latest and biggest failure of a centralized entity in crypto and it could mark the bitter end of their existence,” stated Ivanov. “The foundation of cryptocurrency is decentralized blockchain technology and I expect this downturn to result in the industry switching focus back to those core values.”

Since last week, crypto exchanges like OKX, KuCoin, Poloniex and Huobi have vowed to increase transparency and share their so-called “proof of reserves.” Binance published a list of some of its wallets and holdings on Thursday.