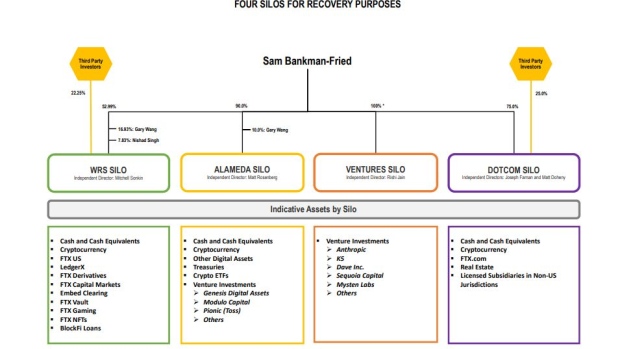 Coinbase Global Inc.’s junk bonds may have been an early warning sign of the FTX contagion. The largest US digital-asset trading platform has seen the price of its bonds plunge this year. The drop is mainly due to the crypto winter, but some industry participants said it was an omen.

Binance Holdings Ltd CEO and Founder Changpeng “CZ” Zhao pledged to amass at least $1 billion for buying distressed assets as he further outlined his plans to backstop the stricken industry. The centerpiece of his plan is gathering partners for a fund aimed at backing promising but cash-strapped crypto projects, he told Bloomberg Television’s Haslinda Amin in an interview Thursday.

Crypto markets steadied as Bitcoin traded above $16,000. The world’s largest cryptocurrency by market value is down 70% since the same time last year, when the token was trading just below the almost $69,000 all-time high. So, this Thanksgiving it might be wise to avoid talking about crypto at the dinner table.

Crypto billionaire Changpeng “CZ” Zhao plans to raise at least $1 billion for a fund to buy distressed assets, he said in an interview Thursday with Bloomberg Television’s Haslinda Amin. He said he’d seek to gather partners for the fund aimed at backing promising crypto projects that are short of cash.

Sam Bankman-Fried tweeted that he would be speaking with New York Times’ Andrew Ross Sorkin at the DealBook Summit in New York next week. A spokesperson for the New York Times said it currently expects Bankman-Fried to participate in the interview from the Bahamas. FTX was based in the island nation.

An accounting firm that touts itself as the first to open its headquarters in the metaverse was accused in a lawsuit of turning a blind eye to a pattern of racketeering at FTX, the cryptocurrency exchange that collapsed causing billions of dollars in losses. Prager Metis CPAs LLC, an auditor for FTX, was sued by an investor who claims to have lost almost $20,000.

In the wake of the spectacular meltdown of Sam Bankman-Fried’s crypto empire, many investors are looking for early warning signs that may have foretold the contagion that was about to unfold. One possibility? Coinbase Global Inc.’s junk bonds.

The largest US digital-asset trading platform has seen the price of its bonds plunge this year. In early January, the price for one of its most active notes was at about 92 cents. It then slid to about 77 cents in April before dropping to 63 cents amid the Terra Luna market crash in May. The bonds traded around 53 cents on the dollar -- a level typically associated with distressed -- in early morning trading in New York Wednesday, according to Trace bond trading data.

Crypto investors are still sifting through the rubble of the FTX collapse, but one thing’s already evident: market activity has dwindled significantly.

Democratic senators Elizabeth Warren and Sheldon Whitehouse have asked the Justice Department not to pull any punches as it investigates and seeks to hold accountable the executives at FTX who contributed to the crypto company’s demise.

The founder of Galaxy Digital Holdings Ltd., a crypto financial services firm, told CNBC that more people will put their money in “safe and trusted custodians.”

Mike Novogratz, the CEO and founder of Galaxy Digital, tells CNBC in an interview that while there was a “bubble” in crypto assets this is a long-term buying opportunity because “Bitcoin is not going away.”

Polite company never talks politics or religion. This Thanksgiving, it might be wise to avoid crypto, too.

Last year’s digital asset investors basted themselves in Bitcoin riches. Then, the token traded just below the almost $69,000 all-time high set weeks earlier. By dessert time, the crypto hopefuls may have even sold the Baby Boomers on a token or two.

This holiday season, the Bitcoin bulls have less to be grateful for. The largest digital asset has plummeted about 70% since last Turkey Day. That drop might annoy the guests who bought in, including the Baby Boomers persuaded by their younger relatives.

Jane Street Group is known among peers for its obsession with risk and preference for stealth. The more-than 2,000 employee powerhouse based in lower Manhattan digs into the health of trading partners, models potential catastrophes, autopsies losses and restricts staff from commenting publicly, because even that poses a danger.

The easiest way to describe the culture that Sam Bankman-Fried and a cadre of Jane Street alumni created at FTX: The opposite.

Devoting days and nights to a gamified digital economy left a mark on some people’s relationships, turning partners into crypto widows and widowers.

Now they have some emotional work to do: in the aftermath of the digital-asset mayhem, believers are trying to heal what Bitcoin and Bored Ape obsessions did to intimacy.

Over the past few days, long-term targets for the world’s largest token by market value have ranged from $5,000 at strategists BCA Research Inc. to $1 million by 2030 for Ark Investment Management’s Cathie Wood.

The cavernous spread reflects the gnarly question of what further contagion may or may not lie ahead following the evisceration of Sam Bankman-Fried’s FTX exchange and trading house Alameda Research, onetime crypto darlings.

The country’s presidency dispatched a digital-securities bill to lawmakers, taking the nation a step closer to raising $1 billion via the world’s first sovereign blockchain bond.

The legislation calls for a digital-assets commission and a Bitcoin Fund Management Agency to oversee crypto-related debt sales. The proposed blockchain bonds, with a minimum investment of just $100, are meant to help finance the construction of the Bitcoin City project.

Kathy Hochul signed one of the most restrictive laws in the US on regulating cryptocurrency mining, with the bill triggering a two-year moratorium on new permits for crypto-mining companies.

“I will ensure that New York continues to be the center of financial innovation, while also taking important steps to prioritize the protection of the environment,” Hochul said in a statement.

Bankman-Fried, disgraced founder of the now collapsed crypto exchange FTX and trading house Alameda Research, apologized to staff in a letter that outlined a crash in “collateral” to $9 billion from $60 billion.

“I didn’t mean for any of this to happen, and I would give anything to be able to go back and do things over again,” he wrote in the message sent to employees Tuesday and obtained by Bloomberg News.

Top partners at the venture capital firm apologized to their investors in a conference call Tuesday for backing FTX, according to people familiar with the meeting.

Roelof Botha, the firm’s global leader, opened the call, and he and his colleagues were repentant for backing the company, with investments totaling $214 million in FTX.com and FTX.us across two funds. Alfred Lin, the partner who led the FTX deal, provided an update on the situation. Shaun Maguire, another partner who focuses on crypto, gave an overview of the sector.

“Bitcoin is coming out of this smelling like a rose,” said the ARK Investment Management CEO as she defended her forecast.