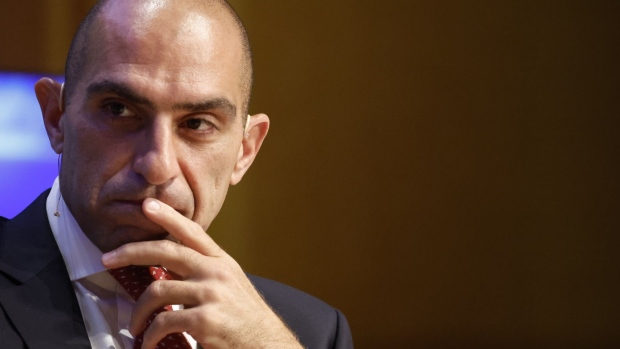 (Bloomberg) -- If one of the chief US financial watchdogs has his way, the collapse of Sam Bankman-Fried’s FTX will shift into high gear a push to make his agency the main Bitcoin regulator and give it oversight of crypto exchanges.

On Thursday, Rostin Behnam, chairman of the Commodity Futures Trading Commission, testified at the first congressional oversight hearing on the spectacular implosion of crypto platform FTX. He told members of the Senate Agriculture committee about the need to move forward with legislation to bring more of the industry onto his agency’s turf.

“Failure to act will leave consumers who have made investments in digital commodities largely unprotected,” Behnam said in his opening remarks.

Though he says there’s a critical need for a comprehensive framework for digital assets due to gaps in regulation and the appetite for crypto, his call for fast action will likely run into resistance.

Bankman-Fried’s vocal support of the bipartisan Senate bill has cast a shadow over the legislation. Critics are wary of new powers going to an agency seen as the industry’s preferred regulator and one that has far fewer resources than the Securities and Exchange Commission.

Voting on legislation during the backlash against FTX also could put lawmakers in a tough spot, particularly if they can’t get the SEC’s Gary Gensler and a host of critics on board. Gensler has said that most crypto tokens are securities that fall under his agency’s jurisdiction. He has also urged crypto exchanges offering them to register with the SEC.

Behnam has backed the Senate legislative effort led by Democrat Debbie Stabenow, the chair of the Agriculture committee who he had served as senior counsel, and Republican John Boozman. The bill would give the CFTC more power to directly oversee cryptocurrencies that are commodities, such as Bitcoin, as well as digital-asset exchanges.

Currently, the agency’s oversight abilities are primarily limited to crypto derivatives. The FTX-owned derivatives exchange that the agency oversees, LedgerX, has remained solvent and operational despite the troubles roiling the rest of Bankman-Fried’s crypto empire. Behnam said the derivatives exchange was under daily communication with the agency and was an example of how CFTC regulation of the crypto market can work well.

Though not the only crypto legislation with industry champions, the Digital Commodities Consumer Protection Act was among the most significant for the CFTC. The bill would beef up resources and staffing for a markets regulator that has been chronically underfunded.

It would take at least an additional $100 million to support that expanded role, Behnam said earlier this year. The CFTC has requested $365 million in funding for fiscal 2023, which ends on Sept. 30, 2023. That compares with $320 million in 2022, excluding a one-time appropriation related to leases. By comparison, the SEC requested about $2.15 billion, up from about $2 billion in 2022.

Behnam says there’s a need to take a step back and reflect on what happened with FTX to make sure existing legislative proposals aren’t missing any important elements. But he said the crisis shouldn’t put those efforts on pause.

“We need to move quickly on a thoughtful regulatory approach to establish guardrails in these fast-growing markets of evolving risk, or they will remain an unsafe venture for customers and could present a growing risk to the broader financial system,” he said.

Gensler has repeatedly said existing securities laws apply to the crypto industry and underscored his agency’s need for more resources to go after bad actors and securities scofflaws. Soon after FTX.com showed signs of teetering, he cautioned Congress against passing legislation that might undermine the broader financial markets.

Regulators and lawmakers have faced public scrutiny of their relationships with Bankman-Fried. Behnam’s push to speed up legislation after FTX’s collapse could put him further in the hot seat with some.

At the Thursday hearing, Stabenow said her bill doesn’t take authority away from other regulators, such as the SEC, and doesn’t make the CFTC the primary regulator. It simply fills in regulatory gaps by giving the CFTC the ability to regulate cryptocurrencies that are commodities, like Bitcoin and Ether, which currently aren’t subject to federal oversight, she said.

“Because crypto assets can be used in many different ways, no single financial regulator has the expertise or the authority to regulate the entire industry,” Stabenow said.

Boozman said he and his staff had at least 240 meetings this year from a wide variety of stakeholders to get input while drafting the legislation.

At the hearing, Behnam that FTX was “dogged” in its pursuit of getting approval for an application to allow LedgerX, known as FTX US Derivatives, to clear crypto derivatives trades directly, without customers having to go through traditional intermediaries. He said he couldn’t speak to the exact number of meetings that FTX executives had with CFTC staff but “they were in the building quite a bit” talking about that application, which has since been withdrawn.

Behnam said he and his team met with Bankman-Fried and others at FTX 10 times over the past 14 months to discuss the proposal -- all at the crypto firm’s request. Nine of the meetings were in Washington and one was at a conference in Florida earlier this year, he said.

“By law, by statute, we needed to address and respond to the application,” he said. “We did not have flexibility to put it on the side of the desk or disregard it.”

Millions of dollars in campaign donations to both Democrats and Republicans probably didn’t hurt Bankman-Fried’s quest to help stave off scrutiny. He gave $39.4 million during the US midterm elections. FTX US cut a $1 million check to the Republican-aligned Senate Leadership Fund on Oct. 27, just days before the elections and weeks before it filed for bankruptcy, according to Federal Election Commission filings.

The crypto industry, investors and consumer advocates will be closely watching Congress’ next moves.

FTX provides the opportunity to understand the distinctions between centralized crypto exchanges and “decentralized finance,” or DeFi, exchanges that aren’t under the control of any single party -- and avoid giving one competitive advantages over the other, said Agnes Gambill West, visiting senior research fellow at the Mercatus Center at George Mason University.

Still others are hoping a consistent and specific conflict-of-interest rule for crypto will emerge out of the coming congressional postmortems on FTX.

“Without that, we’re going to continue to have messy activity,” said Sarah Hammer, a former senior Treasury official and now managing director of the Stevens Center Blockchain Laboratory at the University of Pennsylvania’s Wharton School.